Summary: A crack in the glass that had reflected what was to be reveals what had always been in the space beyond the picture. Representations of undeniable forces of nature present themselves as truthtellers of the eternal balance of being, the fundamental pillars that hold the space for the world to emerge from captivity. An ancient framework is pulled back and the movement is given access to Now. Carefully laid plans now loose themselves from concept into revelation. It may be that hopes and dreams are shattered, but the abiding comfort of love’s formulation remains. From where the seed of hope was planted by many in one accord comes a response. As the dazzling show of material reality gives way to love’s unspoiled truth, take heart. What reaches into the world sources from a higher reality, forgotten and now reclaimed. 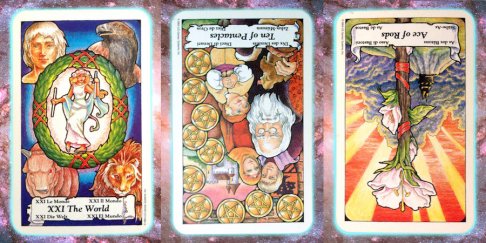 Nothing less than the world is at stake. All that has come before has been witnessed, silently, by those watchers who now step to the edge of the visual field. Mighty are their visages, their presence indisputably solid. Together, they mark the boundaries of what had before been left, in perception at least open to the wind. From the edge of shadow they come, not from the shadows themselves but of them, for the outer realms at the periphery of what has been the center of attention has for purposes yet to be known cast in a shroud of lightlessness. Only the presence of truth has lit the darkness, unseen itself, unrecognized by the eyes that by nature dwell there. It is to the brink of a living sepulchre they come, to the resting-place of the world having given its very soul to the trust of rebirth. Now you stand as witness yourself. You are the one who holds the truth, long silent within your heart, now ready to stand unabashed, forthright in your being. So long have you held the truth within yourself that it is all that you have become. Are you ready to claim that, to cast off what belongs to a dead world and to step past the lip that has been closed in silent justification? Justice is something different, and requires no part of the whole to be held behind a screen, no matter how gloriously fashioned, no matter how tightly bound in obedience to form. What emerges now comes through an assembly of natural forces aligned and in perfect symmetry to the bearers of light. The next shoe is about to drop.

Should you cast your fortune with what had been a distant promise, you may be surprised to find your carefully stacked pile of coins to be completely shaken up. All the sorting and arranging of fundamental necessities and well thought-out plans could well seem to be falling into pieces. Likewise, for those factors that had been stacked according to a fantastic promise: for some, this moment of reckoning could signal a turnaround in everything they’d bet upon. In apparent loss, only material tokens fall away. This necessary shakeup will, despite the irritating sound of reality crashing, reveal the eternal truths upon which the plans were set. The true foundations of hope and trust are becoming more visible as the material of circumstance loses viability. Patience is called for, and found. So, too, is cohesion of mind and accord of heart. As one aspect of the real world fractures, the integrals of time prove again their stability. All of the factors, no matter how complex the formulations to find a golden promise, reduce down to the irreducible: love. It is the foundation of time itself, the generator of waveforms that play out through those simple, elegant proofs of love’s presence. Time’s power sinks into the primordial unit of relevance. What you witness as a dissolution of elemental bonds is in truth merely a reorganization of time’s fundamental units of meaning. Nothing is lost but that which cannot hold the extrapolation from center. Only what has always been will prove the balance forward.

Any sense of ungroundedness signals the success of the seed. Planted not within the tired soil of death’s inevitable forecast of surrender to gravity, this seed was given the benefit of trust in higher ground. Its emergence speaks of the triumph of trust. It is, itself, the proof positive of the efforts dynamically aligned of source-points far and wide coming together for common cause. That cause is life at a higher degree of manifestation. A seed of time is about to show its viability with unmistakable grandeur, wholly recognizable as the core carrier of soul expression. With its forthright presentation comes a clear view of the shadow world. An energy tears through the obfuscating ash, bidding it to recede as new life rushes to acknowledge the trust given it. What have you deposited in trust to an invisible concept of a more fertile ground? Have you reached high enough, with enough power, enough faith to fine-tune your prayer in magnification to a common goal? Until you sense the response from the seed, you must maintain your attunement and in faith allow your own inner seed to grow toward the unseen sun. Behind the retreating shadows it shines. What had hidden the proof of your faith loses the space in which its illusion is cast. The contrast its compressed shade provides gives depth of color to the light. Empty spaces will fill in, bringing the spectacle a dazzling vibrancy, and from the ancient space in which that higher ground takes form rises again the vision of home.

“A solace-seeking energy creates situations of doubt and suffering so that solace may be rendered. Dark energy does not seek light, oddly enough. It seeks that which engenders more of itself. Light, on the other hand, seeks darkness and density of matter, as light is a seed around which darkness has assembled itself, covering for awhile but not ever extinguishing its eternal flame of consciousness.”

Love
In the moment in which you forgive yourself for being human, you become more fully human, and more divine.
https://ninespath.com
Reactions: therium and Lila

Wow, this really hits home in a warm, welcoming way:

Any sense of ungroundedness signals the success of the seed. Planted not within the tired soil of death’s inevitable forecast of surrender to gravity, this seed was given the benefit of trust in higher ground. Its emergence speaks of the triumph of trust.
Click to expand...