This is an initial post in the thread to document my attempts at replicating omcasey's crystal ET communication pics (see thread there).

I will post first results soon. I have done 450+ pictures (already 2 months ago) and so far sifted through the first 70 or so. I will post a picture of the first-50-batch here soon.

First I'll do some small explanations about my approach, the process and show the setup.

I have a small Apophyllite which I often 'charge' on a small orgone pyramid with a flat top (south-american style if you will).
See pics below. Not to be seen is that I also have the pyramid placed on a cut-out picture of the Flower of Life. (Yeah, I really can be hard-core. I know ...).

You see it's still very small which makes the task of photographing and recognizing not really an easy one. 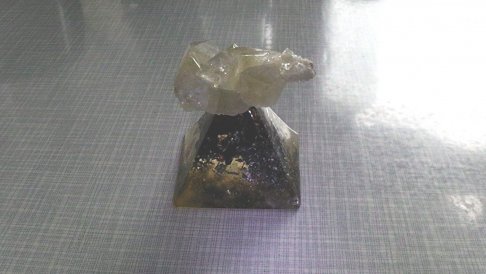 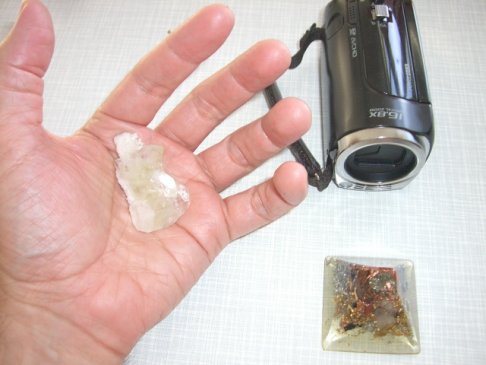 ​
My first attempt was a failure and only resulted in blurry pics. But I used the wrong cam. It was an old digicam with not so high resolution. Thank goodness I also have a HD cam which you see in the 2nd photo for a few years now and it was used for the second and more successful trial just one day after (the one with the 450 pics).

Process pre-shoot:
Relatively simple. I hold the crystal in my hand. Close the eyes, feel it and the energy and try to connect energetically while I'm asking the 'beings' / my Higher Self for any patterns and elements to 'show up'.
Then I make the photos, the first I still did were while holding the small crystal in the hand, most I did though while it lay on the pyramid or just on the white table (the dots you see sometimes next to the crystal area just are the table pattern lines). It took many pics from all sides, turning the crystal all the time.

Dos:
Some results interpretations before I post pics:
I think some of what can be seen (some better - some with a bit more of good will) is indeed 'beings' of some kind (ET, elemental, aspects of self?). Maybe as omcasey says it is always parts of Self as fragmented universal consciousness / aspects of higher self or whatever. From a higher view it certainly always is. Makes sense to me. Or it is all crystal/astral elementals. Or ET beings doing a transmission. Or actually all of it at once. I leave it all open.

So as an open-minded skeptic I don't know what exactly they 'are'.
But I think I know now one thing for sure: They 'Are'.

Last edited by a moderator: Aug 20, 2018
Not formed into anything as regards characteristics or colour, naturally void, is the very Reality, the All-Good.
- The Tibetan Book Of The Dead
The Void (Article, Out-Of-Body-Boards)
Reactions: Anaeika, Lila, Neeraj and 1 other person
OP

Hmm, pics did not work although they worked in the initial draft, strange, posted URLs instead of uploading directly.

Laron, how can we directly post URL pics we already uploaded elsewhere. I find the direct upload function here with these previews not so good. Is it not possible?
Reactions: Anaeika
O

Can you give us a link for now, so we can go there and view the shots??

Laron - a question for you.
Everybody all around the world - Gotta tell you what I just heard
There's gonna be a party all over the world
I got a message on the radio - But where it came from, I don't really know
And I heard these voices calling all over the world
Electric Light Orchestra
Reactions: Anaeika and Sinera

Sinera said:
Laron, how can we directly post URL pics we already uploaded elsewhere. I find the direct upload function here with these previews not so good. Is it not possible?
Click to expand...

Some sites don't allow hot linking, so this may be the reason they are not showing. (This would mean they would not work on any site other that the site they are uploaded on)

What is wrong with the attach files / direct upload option? I use that very frequently and it works great. I find that the thumbnail insert is best, rather than the larger (full) image as the larger sizes are usually too big unless the image has a lower fixed resolution. I can modify the preview/thumbnail size but I find the size I have had set for a while now is a good size.
Social Media: Facebook | Telegram | YouTube | Rumble
Lighthouse at the Oasis: Facebook | Telegram
My Services: laron.nz
Reactions: Anaeika, Lila and Sinera
OP

Seems fixed. I like the graphs in the text where wanted in the flow and not all at the bottom which happens with these uploaded ones. Thanks for fixing.

Back on topic (... soon).
Reactions: Anaeika

Sinera said:
I like the graphs in the text where wanted in the flow and not all at the bottom which happens with these uploaded ones. Thanks for fixing.
Click to expand...

How you describe it, it just may mean you are attaching the files and not inserting them after attaching.

Example, I attach one of your photos and after that, it looks like this:

The next step is to insert the attachment as either a thumbnail or full image. Most of the time the thumbnail is the best choice. You have the mouse cursor where you want to insert the image and you can center it if you wish. If you don't insert it, it remains at the bottom of the post. I can't think of a reason why people would not insert something so inserting is what you would always want to do if you upload a file.

Once you insert it, it removes it as an attachment at the bottom. I haven't inserted it so it's going to show below. but i did insert it in your original post to solve the display issue.

The 'names'or titles I gave them on the pic are tentatively or even a bit humorously, of course. Who knows 'what' they really are.

The 'angry priest' (the first I found and it was even on the first pic of all!) is certainly a bit different insofar as he is more 'cartoonish' and also came about on the rocky surface structure. See the large (babylonian?) hat and the goatee and the black eyes, the 'gnarling' mouth. Surely an intersting fella, haha. Thank goodness he is on the surface. It kind of shocked me a bit to have s.o so negative in there.

It gets more positve with pics 'from inside' the crystal because to me the others are more the result of the playful light fractions in the crystal. And the beings shown seem more peaceful, serene or even cheerful at times.

Remember it is a very small crystal (see pic above) so I guess as a beginner of this that it is more difficult to find sth 'in there' since we have less refractions and light plays. It certainly looks altogether a bit different from e.g. omcasey's huge crystal with these many beautiful light refractions. Anyway, it also worked somehow on some pic as you can 'see'.

You are doing VERY well and thank you for putting these through for us to view.

You are doing VERY well and thank you for putting these through for us to view.

I still did not get further than til approx. # 70 out of the 450 altogether, but will go on with the search soon and hopefully will find more ET faces in the coming weeks. I'll post them as singles one by one as I find them and not as a collection then. So as soon as I found a new one I'll post. Might also do 'remastering' of some of the chosen 8 or post the originals.

Speaking of originals, here's actually indeed the very (!) first pic I took which was already a hit. It is shown in full (no cut-out) and it is funny how you can see that little snarling/gnarling grim priest already from afar, almost at first sight, hehe.
Can't help but find him more funny than frightening. Maybe (provided that you are right and it is always also a picture of 'selves') it was a sign 'on the surface' of my anger issues I sometimes had at the time (and sometimes still do). As said before, luckily the other ones that are 'deeper' inside seem far more benign and even friendly. 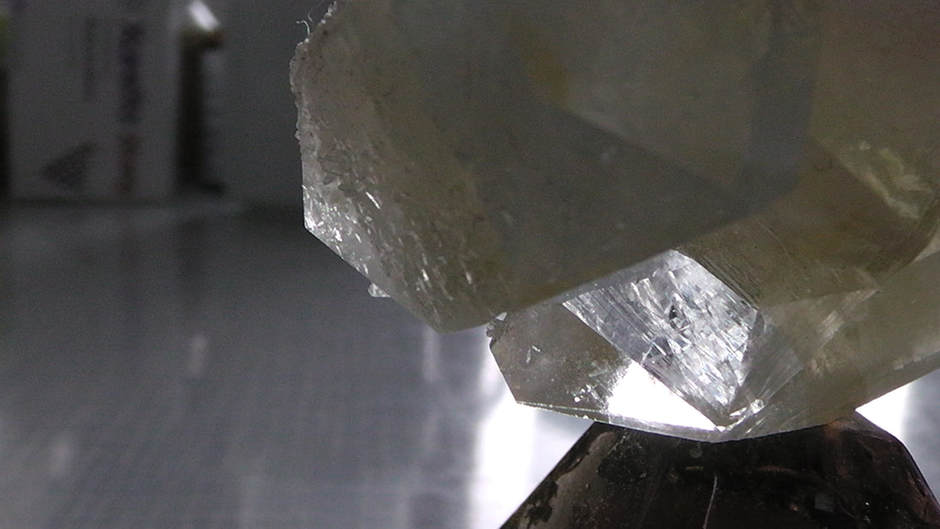 Here's the original colours for "Batman" as taken back then with the digicam. You see I did not change too much. 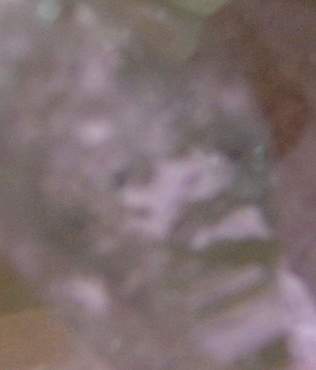 I am amazed Sinera. Somehow I missed this thread. Very exciting.
Laughter is the sound of my soul.
Reactions: Anaeika and Sinera
OP

Pod said:
I am amazed Sinera. Somehow I missed this thread. Very exciting.
Click to expand...

Quite a few seemed to have missed it then. Maybe it did not come up in the "New Posts" list too often or whatever. But I plan to find more or even make new photographs soon and will post some again to keep the thread alive. Also hope omcasey will also keep her thread alive and I remember that June also wanted to replicate the experiment, so we might have 3 threads on this method soon.
Reactions: Anaeika, omcasey_deleted and Lila
You must log in or register to reply here.
Share:
Facebook Reddit Pinterest Tumblr WhatsApp Email Link