The COVID crop circle manifested on May 28, 2020 in Potterne Field, nr. Devizes, Wiltshire in South West England. Professor Jerry Kroth attempted to decode the circle in consultation with a biologist, microbiologist, and virologist. 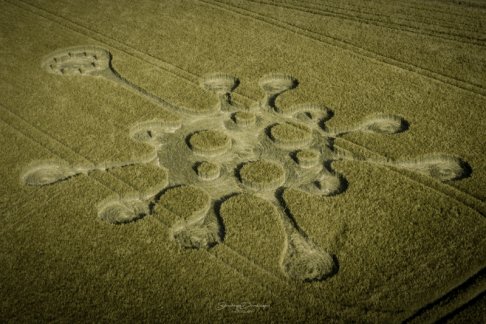 Image from http://www.cropcircleconnector.com​
The elongated spike protein displays either 8 amino acids or peptides which microbiologists refer to as "Sp8" in the scientific literature. This is a spike protein found in SARS which has an unusual positive immunological function, and it may have that function in Covid-19 as well. In other words, the crop circle appears to be proactively suggesting remedies.

The body of the virus displays 3 small circles likely the three letters of RNA, while the larger 3 circles may represent nonstructural proteins.

To better understand it from a virology perspective, below is what Jerry Kroth, an Associate Professor Emeritus of Santa Clara University, wrote: 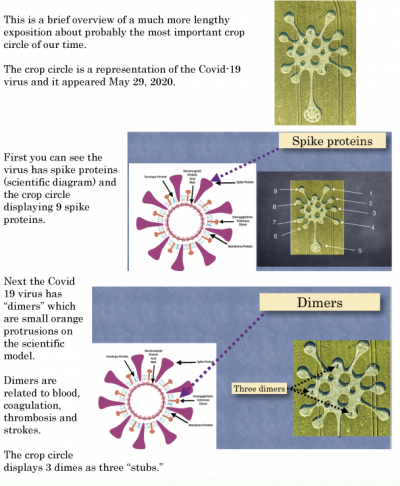 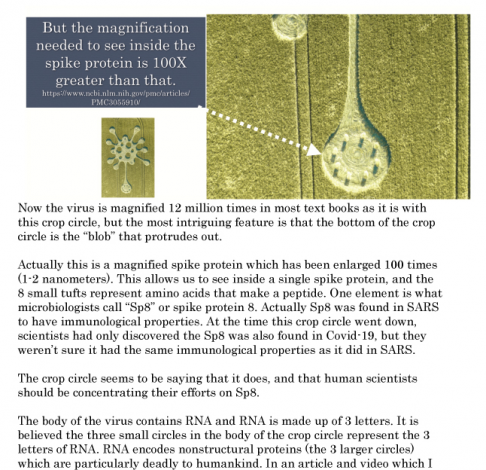 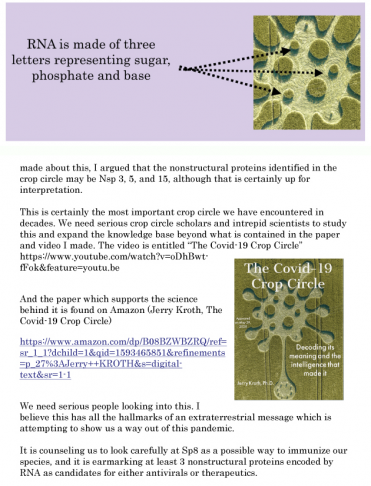 (Amazon Link to the book is here.)​
The funny thing is, all we really need is a healthy high level of vitamin D, as there's been no cases reported of COVID with anyone who has had such levels. Here's a meme I posted the other day: 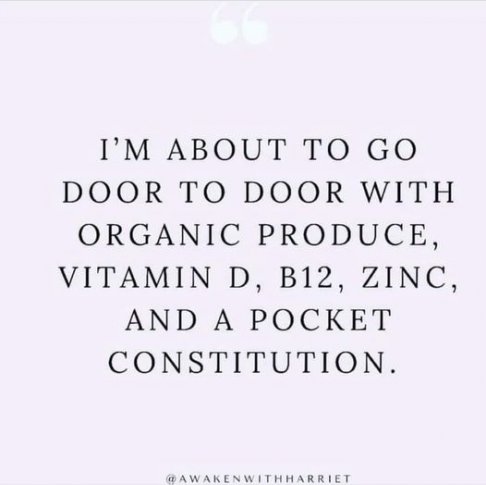 I wanted to send this info to a friend because as I looked at it, the word herbalists went through my head. The amazon link did not work, but I did find 2 YouTube vids he made. He's an entertaining guy, but I did watch them at 1.25 speed - lol. Turns out a second crop circle appeared a couple of months later, which contains interesting info about a compound in walnuts that blocks the cytokine storms. It also may suggest the virus will run its course by the end of 2021. He did put out an updated book that addresses the second crop circle.

Another thing that struck me in each video is that much of this info was figured out several years ago, but apparently no one looked for past studies on which they could build. Cynical Linda thinks that no money could be made using someone else's research and findings. Wait, did I say that out loud?

I'd love to hear what other researchers say about this info, especially in relationship to the vaccines, which I suspect do not address it. Also, why did the previous authors not jump up and down with their findings? Maybe they did and no one listened.

Everybody all around the world - Gotta tell you what I just heard
There's gonna be a party all over the world
I got a message on the radio - But where it came from, I don't really know
And I heard these voices calling all over the world
Electric Light Orchestra
Reactions: Laron and Neeraj
OP

For those that missed it, I asked about this crop circle in a recent QHHT session.