Article Come Out, Come Out, Whoever You Are: Pleiadian Tarot Weekly Message (1 Viewer)

Summary: In pouring out your heart to yourself, you likely saw some things you’re not very pleased with. Let all that’s spilled out be absorbed by the earth, and know that the universe has a way of reassembling raw material into useful opportunities. As you take a look around, look at what’s happening within. Listen and learn: that’s the wisest thing to do when Nemesis comes a-knocking. Sometimes, what looks like a trick is a treat. What’s behind your mask? 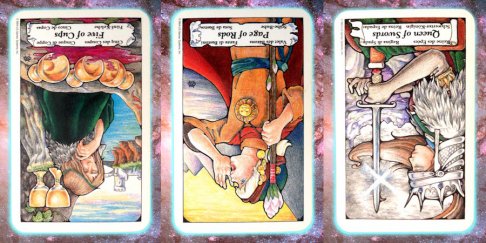 Where will worry get you? While it won’t actually delay your arrival at destiny’s doorstep, it can sure make home feel very far away indeed. You’re finished with that, though, and ready to get on with the journey. And you will, as soon as you pick yourself up from this point of rest. Don’t rush it, because you need to fully appreciate what the moment brings with it. Good riddance to fear in all its configurations, because really it’s a lousy traveling companion. Have you learned that you are fully capable of doing everything you need to do? Along with trusting in a fundamental infinitude from which everything sources, that’s something to consider right now. Let go of what you’ve recently let spill from your heart. Even if you’ve not told anyone of your secret discoveries of self, you have witnessed an alarming display of spiritual bloodletting from recent exercises in self-reflection. Willingly or unwillingly, you’ve seen some rather over-fermented emotional juice spill out from within. Let it seep back into the earth. Universal intelligence knows just how to break it down into pure elemental stuff. Wiser now, next time you encounter raw energy, you’ll be better able to assemble it to your own well-being. When you get cracking again, it will be with a lighter heart ready to take on fresh opportunities. You still have your secret treasures, meanwhile. Nurture them well.

Youthful exuberance knows no age. Paired with wisdom gained from a mindful journeying, it knows no boundaries. When it comes to wrangling with what you encounter, right now you can call on both the raw energy and the hard-earned wisdom present and rising within and around you. Confused? Okay, well that’s not surprising. Revelations and opportunities to do things a new way are springing up everywhere you look. That’s certainly evident in the real world of events as well as the tiny details of your reality, but it’s also present within. What a grand moment for you to revel in the simple notion of the raw abundance of universal energy! Before you go off in a new direction merely for the sake of doing something, tune into that raw energy and listen for what it has to say to you. The edifices of all you’ve learned are fading into the background now, as you find yourself in distinctly new territory. Pay attention to the elements, for they speak in new tones and perhaps an unfamiliar dialect. You’ll get attuned to it soon enough. Listen more than speak for a spell, and witness the turn of the key in your understanding of things. Prepare.

In all of your dealings with Nemesis, it’s quite likely that you’ve called her by many names, not all of them flattering. Probably though, not all of them have held up to scrutiny on reflection. Time has a way of polishing every mirror, even the dirtiest, most warped construction of persona. Have you recently seen some reflections of your own that have taken on a frightful aspect? Perhaps not the nicest angle? Maybe the light wasn’t quite right to accentuate your positives, and has instead left you aghast at seeing some imperfections you had previously thought only existed in others. Guess what? You’ve seen Nemesis and survived to tell the tale. Rather than embellish it with the hocus-pocus of positive spin, acknowledge that you are now wiser and more self-accepting, and you’ll witness an amazing transformation of the ogre into the pure visage of angelic perfection. Because you are that, you know… divine perfection is your inner nature, despite what you see in your own mirror, or cast in the face of another human being. Right now, Nemesis stalks. She’s challenging you to up your game. Are you ready to claim your full right to be as you wish, human? What’s at stake is nothing less than how you choose to see yourself. Hint: It’s the inner light that shows off your best features.

“Worlds collide and everything changes — it’s sure to be a blockbuster! Up until your Nemesis has her chance to do her job getting your life centered around your heart, it’s a malcontent, brawling, lashing kind of film, complete with divas and derring-do. After, however, it becomes a different thing altogether. You don’t mind wading through all the gory parts to get to the ending. It’s all about who makes the cut and you’re the director. The ending is in your hands. Need some inspiration? Follow us to where the secrets of nature are quietly proclaimed by people in the know.” 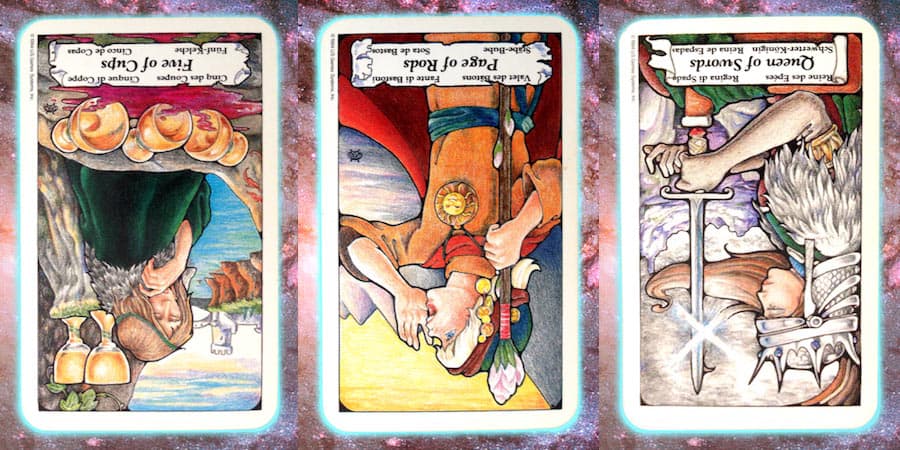 Come Out, Come Out, Whoever You Are | Pleiadian Tarot

What a grand moment to revel in the simple notion of the raw abundance of universal energy! Right now, Nemesis stalks, challenging you to up your game.

Love
In the moment in which you forgive yourself for being human, you become more fully human, and more divine.
https://ninespath.com
Reactions: Tristan and Pucksterguy

I'm beginning to really love Nemesis. She's a brawler, for sure

In all of your dealings with Nemesis, it’s quite likely that you’ve called her by many names, not all of them flattering.
Click to expand...

Guess what? You’ve seen Nemesis and survived to tell the tale.
Click to expand...

Right now, Nemesis stalks. She’s challenging you to up your game.
Click to expand...

Up until your Nemesis has her chance to do her job getting your life centered around your heart, it’s a malcontent, brawling, lashing kind of film, complete with divas and derring-do. After, however, it becomes a different thing altogether.
Click to expand...

I guess once we've got beyond the 'brawling' and become the directors of our lives the film fundamentally changes.

Oh, those lost clips on the cutting room floor. No regrets held here now! Those old curled pieces of celluloid with the crimped edges are not lost, but released. Gone, no matter where. It was all illusion anyway.

It feels the same as after the story has been told in the sparks of the fire. The smoke curls away, dissolves, is gone. But all is not lost.
Vibrate in accord with the universal notes​
​
Question: How do you choose the higher vibrational energies in any given situation? "You choose by taking the high road, instead of engaging in the same argument that you’ve had several times with the same person. You choose by spending more time in nature and putting away your electronic devices. You choose by being true to yourself and the impulse that you have coming to you from within, rather than just doing what everyone expects you to do, or what your parents did." Quote from the Arcturian Council, posted December 5, 2019​
Reactions: Tristan, Lila and Alain

I take it that Nemesis energies are agents of great change? Not just a little change but big change?
Reactions: Tristan, Lila and Maryann
OP

Nemesis shows up in your life in any form that best suits introducing you to your shadow, to what you avoid, to your fear... as a teacher, but often first as a threat, or something that makes you squirm a little inside.
Reactions: Lila and Hailstones Melt

Maryann said:
Nemesis shows up in your life in any form that best suits introducing you to your shadow, to what you avoid, to your fear... as a teacher, but often first as a threat, or something that makes you squirm a little inside.
Click to expand...

Ah, that might explain my illness and emotional purge in October.
OP

... and here's the midweek update: YOU'VE GOT ANOTHER THINK COMING 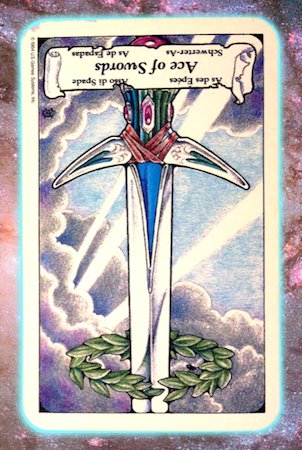 What a great idea… Formulations and computations have been giving you reason to think. And what you’ve been thinking seems like a wonderful adventure to take yourself on. Sure, you’re not ready to share it with the world quite yet, and that’s to your advantage. Why not give it another think, while you’re cogitating and ruminating? Chew on it a while. Turn it around yet again, so you’re more sure that you see all the angles and sides. Your bright eyes might not be seeing all the crevices where shadows lurk, so consider ameliorating your viewpoint with that of another. However, be forewarned: Not everyone shares your enthusiasm nor your inner vision. While it might seem so on the surface, even your most trusted fallbacks in your array of allies is only able to empathize so far. You have to carry the weight of your own karma. Be careful who you ask to estimate the tonnage.

Regard the downward-pointing shaft of the image shown to you, and think of what it means in your life. Take a hint. Pull out a pen and a journal, even a scrap of paper, and test the adage about the pen being mightier than the sword. Your thoughts might be skimming about without you even noticing it, as they rise from newly-opened inner sources of illumination. Pin them down, organize them, and get yourself straight about what you’ve been thinking. No one else can do that for you, although bouncing ideas off of someone else’s mirror might give you insights you hadn’t considered before. While some others can offer you sage advice, you may well notice that you’ve missed seeing some wolf’s fur beneath a wooly exterior. Be wise, wise one.

While you’re taking some beneficial moments to the side of your current main event, placidly watch what doodles stream out from your trusty pen. You have a true friend in hand when you allow your interior sage to dictate some choice phrases and draw the outline of some new framework of thought. Observational mode, taken in short doses between bouts of active participation in what you’ve been dealing with in the meantime, will afford you insights that may well spur you on to a grand and glorious finish. That may give you an altogether different finish line than you had anticipated, a different crowd cheering your arrival, a new perspective from the winner’s circle than you had ever contemplated existing. If that’s not enough to encourage you to cut out the distracting hum of going back to how things were, it might at least provide a new insight to soothe your soul.