Closing the Gender Gap: The Merging of Masculine and Feminine (1 Viewer) 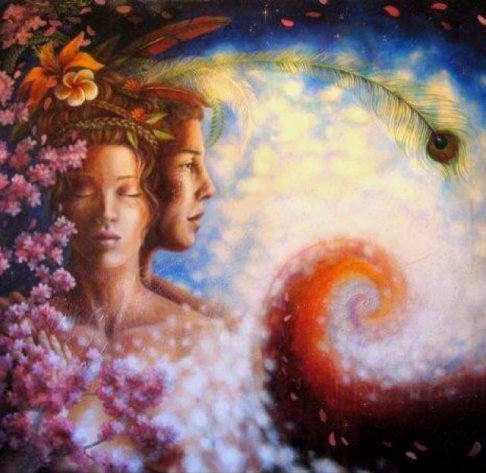 Throughout almost all recorded history, and in most cultures throughout Europe, the Middle East and Asia, there has been a massive gulf between men and women. They have had a very different social status, sharply differentiated roles and apparently different personalities. It’s almost as if men and women have been members of different species with almost nothing in common, who have been thrown together to by mistake.

In almost all cases women’s status has been and still is in many cultures much lower than men’s. It was taken for granted that women were inferior intellectually and morally; that they were, in the words of the misogynistic philosopher Schopenhauer, ‘childish, foolish and short-sighted something intermediate between the child and the man.’[1] Until recent times, in most countries over Europe, the Middle East and Asia, women couldn’t own property or inherit land and wealth, and were frequently treated as mere property themselves. In some countries they could be confiscated by money lenders or tax collectors to help settle debts (this was, for example, a common practice in Japan from the seventh century CE onwards). In the ‘enlightened’ society of ancient Greece where the concept of democracy supposedly originated women had no property or political rights, and were forbidden to leave their homes after dark. Similarly, in ancient Rome women unable to take part in social events (except as employed ‘escort girls’) and were only allowed to leave their homes with their husband or a male relative.

In parts of the Middle East, these attitudes have persisted to the present day, and it’s only very recently that the status of women has begun to increase slightly. Over the last few years Qatar and Bahrain, for example, have given women the right to vote and to stand for election, and the Kuwaiti parliament recently passed a law giving women the same political rights as men.

Wherever women’s status is low, the duties and roles of men and women are usually sharply defined. In most cultures, they have practically lived in two different worlds: men in the external world of work, culture and politics, and women in the internal world of childcare, cooking and cleaning. In some societies like Ancient Greece or Rome or modern day Saudi Arabia women were/are effectively imprisoned in the internal world for much of the time. And at the same time, men were excluded from women’s domain (at least to an extent). Until recent times they were denied access to the birth of their own children and to usually only played a minor role in childcare.

Traditionally, men and women have distinct kinds of minds too. Many studies have shown that women have a stronger capacity for empathy than men, that they have a strong tendency for caring and compassion and for forming relationships.

Read More
Yesterday I was clever, so I wanted to change the world.
Today I am wise, so I am changing myself.
~Rumi
Reactions: Tania and Stargazer
OP

It's sure time for equality.
Reactions: Stargazer

Excellent article! In our "dualistic" reality (of dark/light, hard/soft, masculine/feminine contrasts), I agree that it's well past time for us all to embrace ALL aspects of self without judgment, as well as accept and express ourselves--each in his/her own unique and wonderful way.

I was just reading another article today (can't recall exactly where), that essentially said that we are trinary (three-part) beings in an illusory and binary (dualistic, two-part) world. We've been taught and expected to "choose" between so many supposedly opposing views and conditions for so long that we've forgotten that everything is a unique and wonderful aspect of the same Being (which is ultimately the unified consciousness of all of us). We've learned to focus on either the "mind" (thinking/egoic/aggressive/service-to-self or "male" part) or the "body" (intuitive/nurturing/receptive/service-to-others or "female" part). In doing so, we've lost sight of who we really are.

The truth is, we're each ALL of those things. Instead of being "mind" or "body", we also need to be "heart" too...which is the neutral and balanced expression of ALL aspects. I think that's what many religions refer to as "The Middle Way"...a perfectly balanced path that respects and serves everyone and everything in equal measure.

It's great to see so many people waking up and finally "getting it"!

Vickie said:
It's sure time for equality.
Click to expand...

I hope we get equality, this is what will be of the greatest good of all. However, I feel that some feminists would be more likely to shift the tide to a cold matriarchy, to make up for the atrocities unjustly done to women.
https://www.facebook.com/pleiadiantwinflames
Reactions: Vickie, Stargazer and June

I worry little about cold matriarchy as patriarchy to this point is still pushing ahead setting the standard for freezing. Same way I do not worry for and indigenous president or diversity in lawmakers as the Caucasian males self serving bromance ruling style is creating exactly this issue of lack of unity that makes us fear eachother and fear the people who are brave enough to stand up for collective rights. Feminist fight for equal rights for women and their children (all of us) and the women that still suffer the most inequality are women of color. Feminist also fight for the LGBT community and refugee rights ( innocent men , women and children are being put in camps for fleeing war) Fighting for the rights of the ones that have little is always a daunting task because of the density of trauma that usually accompanies lacking stability circumstances. I understand the intensity appears scary but most of us would possibly do better by focusing on what privilidged we would be willing to let go of to build a more just world - than worry about the potential unfairness of matriarchy. It is only a rational thought if you project linear reality onto women - when in fact better balance - higher female representation has the potential for the multifaceted 5D reality everyone here seems to be ready for.
Reactions: Stargazer
S

does male dominate female at home
government is dictatorship
this is karma !

unbalance on lowest awareness level , the physical , reflects back in the same physical way

I wish more people would know this ,

it would be good for the planet , saves so much time , to wait for the collective vibration to go up