Summary: Though it may seem that the endless task of living yields only enough to keep you going another day, something rustling in the mess may draw your attention. Stop doing for a moment and pay attention, for all that you have done is itself finished with being made. Your efforts are coming home to roost, and within the melee of settling into an order obedient to natural law, you are about to see the core open up. All drama aside, a simple act is taking place. Labors of building are giving way to the re-establishment of the foundation. Corrective measures being nature’s specialty, secrets of light obscured will reaffirm ancient geographies. A single will imposed upon duality cannot hold the core. Only in recognizing that the mystery holds in essence another factor will the way to unified understanding be opened. Extend your vision to a further focal point to see through the facade of the tower of lies.

Seven of Pentacles (reversed) — The Tower — The Moon 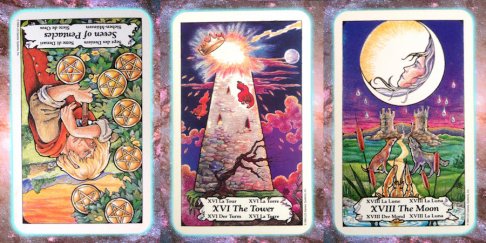 The karmic boomerang is in play. Have you resigned yourself to your fate, ducking the return of fruits of ill intent? If so, you always knew that someday you would discover the truth about the adage about reaping what you sow. There’s only so long that you can plant certain kinds of seeds, nourish them with the blood, sweat, and tears that come with the hard work of making life sustainable, and avoid getting caught in brambles of your own making. That is, if you have used the blood, sweat, and tears of anyone but yourself. Having done so will finally put you firm in the face of your own body’s labors spilling out into a puddle of inevitability. Working within the matrix of hard work coming at a cost, you will eventually have to put your own life force into action. That may prove difficult, painful even, if you have relied on outside sources of vital fluids. However, if you understand the matrix of hard work, and you have maintained yourself within it, with or without the concomitant adage of labors bringing their own sweet rewards in time, you will have poured enough of yourself out to have a moment to reflect on your work. It’s just about at this time that you decide you’re out of juice. Like one ducking the return of a karmic boomerang, you may rest your head; you’re not to be blamed for leaning on the trust that’s carried you thus far. You won’t, by doing so, miss the return on your investment. So relax, and know that sweet rewards may well be on the way back. For now, though, rest.

Situating yourself at the front row of attention, having carved out for yourself a spot where you can have full view of the revealing, you can sit back and immerse yourself in the spectacle. You are in just the right angle of arrangement to get the view you need to affirm your understanding. Of course, if you have invested yourself fully in the mathematics of separation and supremacy, you might have a view uncomfortably close to the heart of the action. Right about now, age-old formulas of the alchemy of majority are reaching critical mass. Infinity is about to break the limitations built around it. What you are about to see is a demonstration of life itself taking back what had been crammed into an artificial nucleus of inevitable decay. Life surely can regenerate when the natural physics of light are respected, when the form of mass follows the dictates of least resistance and a graceful symmetry dances within chaos unperturbed. Not so much when the harsh and heavy lines of control seek to extract the essence without regard for the whole. Now you are seeing the results. Sit back and be ready for anything, for even those who have created the control tower have no say in how things will play out. Matter and antimatter are about to reach the point of no return in their headlong pursuit of understanding other to gain mastery of self. Alchemical gold may well be expulsed from the conflagration and land in your lap. Pay attention now, from where you sit.

MOST OMWARD DIRECTION: The Moon

After the blast that’s built over eons of time, countless generations of striving matched with endless iterations of enduring, all that has been will be as washed clean. Ancient edifices emerge as the land settles into a newly enlivened expectancy of trust fulfilled. Resilient and ready, what had been unyielding becomes open to receive the influx of elemental encodings of matter and information. A fireball softens into a dependable, steady glow, wherein the heart reflects its acknowledgment of a living and holy light. Where you have stood on the precipice of giving up, you will rest in the cradle of affirmation, of trust fulfilled and mysteries quiescently acknowledged. Understanding will follow, as forced singularity splits open the atom of nucleated consciousness and awareness overtakes the ombre receding. There is no more preparation needed for the initiation that is at hand. Circumstance, taking on a life of its own, is hatching the hidden. It is life that escapes from its tower of hierarchical control and reforms them into a balanced holon in which the integrity of complementary forces feeds into a self-sustaining perpetuity. Life itself is clearing the way for its continuation, its redefinition, its greater understanding within a liberated and horizonless expanse. Primordial wisdom rises and attests to the enduring pathway that binds the oppositional forces of nature. The way forward is the way between what has been split apart from manufactured unity. Thus will illumination rise.

“Damning is the evidence against humans lucky enough to be in a position of power. Any power used to prevent making creatively that which the heart impulses people to make is abusive. A long line of dramatic misdeeds acted as a ‘tracking’ device for gradually inhibiting the natural creative blossoming of light lace-ins to your genetic can of worms. Instead of doing what they want and dreading nothing, people have become conditioned to the opposite polarity of acting from guilt and fear and creating as taught. This understated dark agenda takes a lot of organization and quiet footwork, as well as a total disregard for the welfare of the mass of humans on the planet. Are you ready to cancel out that agenda and create a new one? Then you best have an understanding of soul’s true nature.”

Love
In the moment in which you forgive yourself for being human, you become more fully human, and more divine.
https://ninespath.com
Reactions: Manuel and Lila
OP 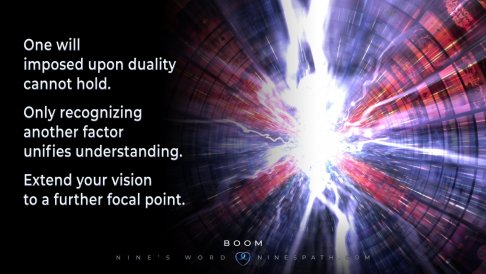