Here’s another great video by Clif High — only a short one (20 minutes). I’ve basically covered the entire video below with notes if you don’t feel like watching it all. This one is from the 12th of July, 2021, via Clif High’s BitChute channel. It’s embedded below my notes.

The old ALTA webbot reports (especially 2015-2016) showed that big pharma was going to disappear from the USA and be replaced with something like an enlightened form of herbalism, or bimolecular herbalism, or something like that. So there’d be high quality medicinal herbs, mushrooms, plants, etc. and apply biomolecular knowledge to them to extract what was needed for health.​
​
This would create a new industry that would become global and have a huge impact. The herbal products and extracts would be provided worldwide. He says he’s now worked out how this is going to happen.​
​
He gets into the patents that Anthony Fauci was involved in that go back to 2003, which includes the monkey virus, corona virus, and spike protein, all patented, created and realized deliberately. All this is able to be ascertained and worked out based on the data available online, such as the Fauci emails.​
​
So we know COVID began way back in 2003 at least. Clif mentions that the ‘sun disease’ started to show in 2003. The sun has a CORONA inside… so it was a play with words by the webbot.​
​
He mentions that Trump is symbolic for these times, in terms of the Justinian quality of his mind being able to look far out, plot different avenues, not reveal what’s going on in the future but leave enough crumbs in the moment, that foretell future events. SO it fits perfect into the time of the Age of Aquarius.​
​
He says it helps to think you are propelling the planet with your small steps and this is part of what the Age of Aquarius is doing, and that’s what he’s doing today with mentioning big pharma.​
​
He says big pharma has killed itself and will be dying over the next few years. Because of the amount of people who will/have died from the COVID vaccines, this taints them. They will probably end up being hung for war crimes basically. Many doctors that took the vaccine will die, and those who were distributing it that did not take it, and gave it to others will go crazy and/or have retribution occur.​
​
So those medical people who were responsible for distributing it are going to feel bad for the rest of their lives. A small number of clear thinking people will know they did their best so will not give themselves grief.​
​
The entire institutional structure of hospitals, big pharma’s distribution of products via bribery through the hospital system and doctor system, insurance companies, etc., is gone. It’s the end of the world as we know it.​
​
The democrats have killed that off. “Who’s’ going to take another flu shot when they see Aunt Mable croak stirring spaghetti before Sunday dinner.”​
​
The nano particle “shit” that’s in there, not particularly the spike protein but it may be participating, he says, is causing the micro blood clots in the heart and brain, and liver, spleen, throughout the whole body. Just because they haven’t had it yet doesn’t mean it is not still going to occur in the future.​
​
Cuba is rioting and the regime will be overrun in the next few days. A new Cuba will manifest which may want to reconnect with Florida, not Washington D.C. as they won’t want anything to do with the communists anymore.​
​
Canadian Pilots: Now they are being told by insurance companies if they took the vax, that’s an experimental product and you can’t fly. They’ve had incidents that are both commercial transport and military. The problems with the blood clots are causing this. So the insurance companies are not covering any flights with pilots who have had the vaccines. This is going to spread around the world, as in pilots now being allowed to fly… impacting global traffic.​
​
Graphene Oxide in the vaccines is causing people to have mental aberrations. It’s causing many to get angry. When the problems start manifesting in them, they will become basically angry zombies as we are not starting to see. For example, the woman who was restrained in an airplane had to be duck taped in her said. She was trying to bite people. She had become rabid, wasn’t in her right mind and wanted to open the emergency door in midflight. Clif thinks this would have been because of the vaccine and this will become more and more frequent. They will start saying if you have had the vaccine you can’t go on airplanes. Not all COVID vaccines has the graphene oxide.​
​
In conclusion, Clif High says the future is looking very hopefully as we can redo things and make the world a better place, basically.​

Laron said:
Canadian Pilots: Now they are being told by insurance companies if they took the vax, that’s an experimental product and you can’t fly. They’ve had incidents that are both commercial transport and military. The problems with the blood clots are causing this. So the insurance companies are not covering any flights with pilots who have had the vaccines. This is going to spread around the world, as in pilots now being allowed to fly… impacting global traffic.
Click to expand...

I believe Clif because he does not post things he's not personally researched. I want to find some kind of report about this quickly because I think it will go a long ways to convincing some people not to do the max.
Everybody all around the world - Gotta tell you what I just heard
There's gonna be a party all over the world
I got a message on the radio - But where it came from, I don't really know
And I heard these voices calling all over the world
Electric Light Orchestra

I like that he this time at least has a more positive outlook with his prediction(s), well, in part. Normally all he says and concludes for the future outcome seems very grim and dark. We need some optimism.
Let your Truth be Authority rather than Authority be your Truth. - Sinera Arenis
Do or Do Not. There is no Try . - Master Yoda

Most doctors continue to practice with comfortable indifference. Some see the errors, damage, and limits of their practices but still walk lockstep with the herd and protect the brotherhood. I don’t know what it will take to get these doctors to resist the dictates who rule over them. I’ve had far more success reasoning with parents and intelligent people who are not attached to traditions that are damaging, unscientific, and not even supported by our own medical literature. - Dr. Suzanne Humphries
Reactions: Laron

I see Cliff is back to the woo again, around May time he was talking about, what he called ‘ the end of the woo ‘‘.
June would bring worry, July , panic and August,change. Apparently the exposure that aliens exist and the government has been lying for seventy odd years in early June (.actually it didn’t happen till late June and then only just ). would make the population angry, from this more info would appear, other lies come to light, and so the end of the woo, everything out in the light from then on.

That was the gist of it IMO.

Linda said:
I want to find some kind of report about this
Click to expand...

This is what I saw recently on twitter. I haven't gone to the web page to see if it's authentic.

azlynn said:
I haven't gone to the web page to see if it's authentic.
Click to expand...

well, that is eye-opening. thanks

azlynn said:
This is what I saw recently on twitter. I haven't gone to the web page to see if it's authentic.
View attachment 11849
Click to expand...

I'm not as optimistic as Clif, mainly because if he is right about the mass die-off from the vaxx, as well as the economic instability here in the U.S. due to the demise of the petrodollar, some very hard times ahead. What I envision is that we are just getting back on our feet three or four years down the road, and then the mini Ice Age really kicks in. I think the "good times" Clif mentions, due to mass die off of the wokians, as well as the end of the Fed and "funny money", will be at least ten years down the road.

Food insecurity is going to be a big problem for quite some time, as I see all the supermarkets around here really piling in pallets of extra inventory to prepare for hyperinflation (buy low, sell high). As Clif has noted, famine, too, (exacerbated by weather warfare) has been planned for bonus depopulation numbers since a relatively low percentage of Americans took the jab (probably under 30% despite what the media says). Last chance to stock up and prepare for the coming instability.
Reactions: Laron and Linda

good you mention it GregH3000 prices appear to raise half in hidden without most beeing aware of it
Reactions: GregH3000
OP

Point behind his quote in the image, "They appear to be under a spell'.... 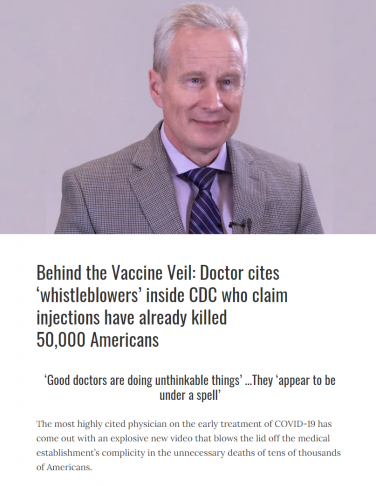 "The most highly cited physician on the early treatment of COVID-19 has come out with an explosive new video that blows the lid off the medical establishment’s complicity in the unnecessary deaths of tens of thousands of Americans. Dr. Peter McCullough said these deaths have been facilitated by a false narrative bent on pushing an all-new, unproven vaccine for a disease that was highly treatable.."

"..We have now a whistleblower inside the CMS, and we have two whistleblowers in the CDC. We think we have 50,000 dead Americans. Fifty thousand deaths. So we actually have more deaths due to the vaccine per day than certainly the viral illness by far. It’s basically propagandized bioterrorism by injection.

A lot of the people who took the vaxx are truck drivers and pilots. Supply lines are going to start breaking down when the effects of the shot cause accidents, thus creating a market for unvaxxed workers; already I'm seeing reports of empty shelves.

Hyperinflation will hit in the fall so I suggest you stock up now.
Reactions: Laron
OP

There's going to be a lot of job opportunities coming up.

GregH3000 said:
A lot of the people who took the vaxx are truck drivers and pilots. Supply lines are going to start breaking down when the effects of the shot cause accidents, thus creating a market for unvaxxed workers; already I'm seeing reports of empty shelves.

Hyperinflation will hit in the fall so I suggest you stock up now.
Click to expand...

Laron said:
There's going to be a lot of job opportunities coming up.
Click to expand...