"The Australian army has begun forcibly removing residents in the Northern Territories to the Howard Springs quarantine camp located in Darwin, after nine new Covid-19 cases were identified in the community of Binjari. The move comes after hard lockdowns were instituted in the communities of both Binjari and nearby Rockhole on Saturday night.

"Residents of Binjari and Rockhole no longer have the five reasons to leave their homes," said Northern Territory chief minister, Michael Gunner, referring to the country's five allowable reasons to avoid lockdown (buying food and supplies, exercising for up to two hours, care or caregiving, work or education if it can't be done from home, and to get vaccinated at the nearest possible location)." 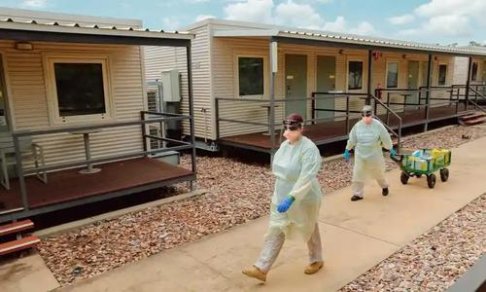 What's going on in Binjari, Robinson River in Northern Territory, Australia...on the land of the Aboriginals???
Remember 1776...

Residents of Boggabilla Australia who are not double jabbed cannot get essentials like food and water. https://thrival.international/2021/11/18/water-and-food-needed-urgently-in-boggabilla/

Nov 22 update on Boggabilla. Military surrounds aboriginal communities, holds them down, and forces them to get vaxxed. Many military are against this and rotate out for stress reasons. Military are told that if they do not comply there will be repercussions. https://thrival.international/2021/11/22/national-update/

Also it's possible that's not the real ADF rounding people up, but people, private contractors, dressed up as the ADF.

Residents of Boggabilla Australia who are not double jabbed cannot get essentials like food and water. https://thrival.international/2021/11/18/water-and-food-needed-urgently-in-boggabilla/

Nov 22 update on Boggabilla. Military surrounds aboriginal communities, holds them down, and forces them to get vaxxed. Many military are against this and rotate out for stress reasons. Military are told that if they do not comply there will be repercussions. https://thrival.international/2021/11/22/national-update/

Thanks for posting this, therium, I didn't know that. For people who do not know the locale very well, Boggabilla is nowhere near the Northern Territory or the location of those quarantine camps in the Northern Territory. They are unrelated. Boggabilla is an open town, not a remote community, although naturally it was once tribal lands, and the name of the town is the corruption of a name in the Gamilraay language. I am sorry that the heavy hand of politics (hopefully not enshrined in law as yet) is having this disastrous effect on the people of the town.
Vibrate in accord with the universal notes​
​
I see it's time to change my signature message. Out with the old and in with the new! ​

An alien takes over the body of an Eartman...
Omikron is a massive city-state in which the people are ruled blindly by an ancient supercomputer and a communist dictator with an iron fist who carries out the computer’s orders. Little do the people of Omikron know that a demon lord from the last circle of Hell is the true power behind their land’s governance.

Omicron: Directed by Ugo Gregoretti. With Renato Salvatori, Rosemary Dexter, Franco Luzzi, Gaetano Quartararo. An alien takes over the body of an Earthman in order to learn about the planet so his race can take it over.

There is more...
David Bowie scenes in Omikron Nomad Soul

The game is the spell, soon over and out!!!

Have a look at the lyrics of Bowie's Lazarus song.

Originally written for an eponymous off-Broadway production revisiting the character Thomas Gerome Newton 30 years after The Man Who Fell To Earth, the film adaptation of which Bowie starred in, Bowie’s “Lazarus” addresses themes of mortality. The video and its accompanying album were released on Bowie’s birthday (8th January), just days before his untimely death from liver cancer. It is a supremely artistic, supremely Bowie statement: a condensation of the human narrative, birth, death, into a single song and, like the Biblical parable of Lazarus (see bottom of this annotation) death pervades in life, as life pervades in death.

The video contains several tellingly morbid images – a hospital bed, a suspiciously coffin-like wardrobe, Bowie appearing frail, his eyes obscured in Oedipal anguish, as the camera shakes, careers in one long take. Critics have read it as a goodbye, noting its new-found poignance.

of Light
Sets us Free

Love to you All

Maybe we need an Australian thread.

Australia puts teens who tested Negative for COVID-19 into COVID camps.
Austria (not Australia) considering forced vaccination. You should be able to find news links for this by doing a search.