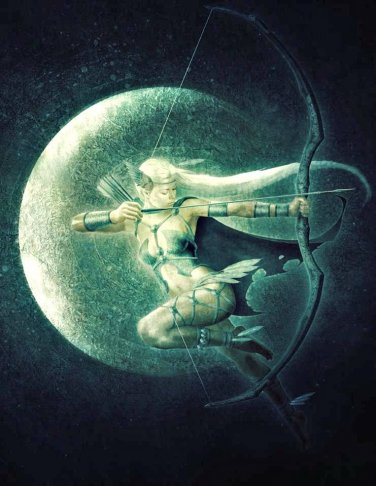 ​
We are now under the “shadow” of the coming full moon eclipse which will be on the 6th June in NZ and Aust, and the 5th June in USA, Canada and UK, the first of a new series in Sagittarius and Gemini or “set” as I sometimes call these so people don’t confuse them with the “saros” series which covers thousands of years and not so important for our daily lives.

These will be around for 18 months happening every 6 months until then.

Some last longer, and when eclipses occur in opposite signs every 6 months they are especially important if they are the same as our prenatal eclipses which relate to past lives and our spiritual path in this life.

For instance the series just about to end in June/July after this first new one in Sagittarius, are important for me as I was born with a prenatal Capricorn eclipse and also a lunar Gemini eclipse so I get a double whammy and an end to an era in my life.

The new series and this one in particular coming up acts like a usual full moon but more extreme with some unexpected events attached to it.

For Sagis or Geminis, a lot will be taken out of your hands if you have been having ongoing issues that are unsolvable.

These eclipses have an effect up to a week or more either side of the event especially if it's on the degree of your Sun or moon.

My moon is in Sag in the 12th house so I will be extra careful on the roads and with my health .

This one falls at 15 34 degrees of Sagittarius and is all about travel, law, education, communication, networking, belief systems, the outdoors, sport etc and all matters relating to both signs.

For many this series will involve many choices and one will be whether to live in a city area or seek a place off the beaten track. Also about any of the other subjects I listed.

Sag is also about wide open spaces, mountains, deserts or even islands surrounded by ocean.

I would definitely be careful on the roads near this one, no matter what sign I was and try not to travel exactly on it or near it as delays are likely to occur or complexities arise.

But globally I expect a few announcements to be made with regard to travel laws for the coming months until the next two eclipses in this series, one of which is total, in Sag mid December exactly when Saturn moves back into Aquarius to stay, being joined soon after by the ruler of Sagittarius, Jupiter. This is when I think travel will be really getting back to normal again and airlines can get on their feet again if they are floundering.

In the meantime globally, as there is also a Perigee moon 3 days before this eclipse on the 6th, we can expect some extreme weather, some bigger than usual earthquakes more than likely in places where they don’t usually happen as well as the usual locations, and also major world announcements from world leaders.

President Trump had a prenatal lunar eclipse in Sag before his birth and is a Gemini so he will feel this one and he is at present having issues with social networks which is very much a Gemini/ Sag factor.

For Gemini/Sag people or those with moons or Ascendant, MC or IC there, you are entering a new phase of your life where blocks will be broken down in your lives in areas ruled by these signs.

For all of us, this series will encourage us to develop our higher mind to see the much bigger picture and dig deeper than what we are being fed by popular media and idle chatter that goes on around us.

And for the Globe, new laws and rules will be coming in about travel between countries, education, sport and religion. Existing very old traditional laws will be changed totally in these 18 months ahead.

This aligns with Saturn in Aquarius changing our communities and global environment forever.

It is possible in the month ahead that there could be an event that interferes with Global communication as we have a situation where Mercury is OOB until the 9th June and will be Rx from the 17th June, and there have been other predictions of similar for this time.

3 eclipses in a row do rather disrupt energies surrounding the earth and within it as it is.

The Sun and the Moon control the Magnetic fields, the weather and all that keeps us alive on this planet.

But back to the now today Mercury conjuncts the North node in Cancer which is telling us to be caring and aware when we interact with loved ones or people in general, recognising that we on this planet, as a people are connected in more ways than we realise as we all came from the same source. We are all sparks of divinity and we all return to the divine source when we leave this planet.

Even if we do not agree on every day matters we can be civil in that disagreement, and non aggressive. But we also need to protect ourselves and what we believe in, our truths and ideals.

The Nodes are about our karma so sometimes we have no control over what is triggered.

Mercury today moves into Cancer for the coming two months and a bit more as s/he will Rx from the 17th June until the 11th July, so the last two eclipses will occur in that period adding a little more complexity to matters.

But for the moment Cancerians get to enjoy the slightly over the top and not quite in control energy of Mercury as he moves through their sign until the 10th June. You get to think outside the box for a while , and Cancer being about the general populous is going to bring some lightbulb moments as our thinking processes change a lot and many will see life through different eyes to before.

I think eclipses tend to imprint new patterns as it is through their unusual action.

Mercury in Cancer in general will for that sign bring more mental activity and more care with details and data, and a need to keep contact with people, network a little more in the times ahead.

Geminis and Virgos will be more focused on family and domestic matters, wanting to get in touch more with loved ones and be out and about in public as well.

For the rest of us some or all of the above can apply but know there is a slight twist as our thinking is changing as we have to now think for ourselves more due to the fact that popular media is a bit out of sync, and there is not so much order to it all due to many conflicting opinions and questions being asked.

Many people are opting out of social media due to the confusion that is reigning there are present.

This is to be expected in this highly transitional year as Saturn goes about his business of creating for the long term, more structure in our lives in areas that really matter collectively for this planet and all that reside on it.

"We are endless galaxies but we have seen just one star."
My Astrology focused Facebook Page: Neptune's Magic
Reactions: Alain and Tania

Ah! I'd been waiting to hear about this upcoming set of eclipses.
It sounds like it's likely to be a very active time in many ways with big global changes afoot.
Reactions: Alain and Janne
OP

Lila said:
Ah! I'd been waiting to hear about this upcoming set of eclipses.
It sounds like it's likely to be a very active time in many ways with big global changes afoot.
Click to expand...

Yes its already started to play out with the social media scenario happening but I am pleased there will be no more censorship of the important videos that were being taken down about natural healing and people like Robert F Kennedy Jr fighting for peoples rights and explaining what was really going on and Dr Zach who is amazing.

Now come the law suits with the last two eclipses in the previous series. Its real sad that people are turning on each other though with the changing tides , friends against friends. But its important to stay in that higher mind, no matter what and also love unconditionally like never before.

And trust that something better is coming for the entire world, but first there could be a little more chaos as thats what it is now.
Reactions: Alain, Tania and Lila

I pray for Wellington (except that I don't pray) so I intend for Wellington to be safe throughout the eclipse period.
Vibrate in accord with the universal notes​
​
As long as bribery, intimidation, threats and blackmail are used to enforce public health, there is no real public health (Lisa Renee, creative commons 3.0 BY-SA, www.energeticsynthesis.com) July 2020​
Reactions: Alain, Janne, Tania and 1 other person
You must log in or register to reply here.
Share:
Facebook Reddit Pinterest Tumblr WhatsApp Email Link