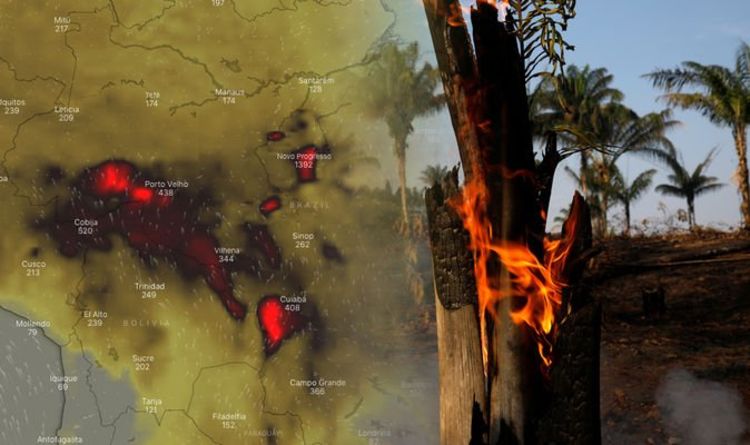 Amazon rainforest fire: How did the Amazon fire start? How long has it been on fire?

I just linked a slightly random article (there are so many now) to bring attention. But I just wanted to start some discussion about this.
What do you guys think?

There are some fires going on around my area as well. We even had smoke filled skies a couple days ago. Lots of fires.
This is some pretty heavy duty stuff.
Reactions: Alain, Lila and Laron
OP

To extrapolate a little on what I'm seeing.
I had only heard about it a day or so ago. A lot of people are pointing to Bolsonaro's active push towards agribusiness and helping the cattle industry, who are being blamed with illegal deforestation.
I saw somewhere that many of the photos used in common memes and articles being shared are of other fires (from other countries and times) to try to exacerbate the reaction. But even with some exaggeration, I am a little afraid of the implications of such a massive worldly infrastructure being damaged in such a way.
Bolsonaro, a Trump supporter and follower, feels he is being accused falsely and is pushing blame to others.

When larger news articles like this come out, I'm initially a little inundated with new information and names that I wasn't familiar with. So it's taking a little to catch my bearing on what my intuition is pointing to.
That said, it's still terribly sad. I've been feeling sporadically downtrodden thinking about just how much we are screwing the Earth. I'm generally feeling pretty optimistic and seeing the new versions of Gaia coming through. But when things like this happen... It's just very sad.
Reactions: Lila

I understand what you are saying. It is pretty darn hard to figure out what is what from the media because so many slant the facts and outright lie.
Also, there is the possibility that a natural disaster is a needed process in Gaia cleaning up and restructuring. What am I to think or do from my house here in the US?

When I don't have a good grasp of a situation, I move to a larger view - going outside the who did what debate. I say a prayer, sometimes if it is a big one, I write and tape it to the kitchen window. When you are in quiet place, the words will come to you. It might be something like help the people and wildlife find safety or let the fire happen with minimal destruction - something along those lines.

You are being called to this situation, and your words will have an effect. If you are inclined, then share your prayer here, and we all can join in.
Everybody all around the world - Gotta tell you what I just heard
There's gonna be a party all over the world
I got a message on the radio - But where it came from, I don't really know
And I heard these voices calling all over the world
Electric Light Orchestra
Reactions: mcspencer, Alain, Lila and 1 other person
OP

Thank you Linda .
I was also just wanting some discussion to start up about this though too. Heheh. I enjoy hearing from your perspectives and tidbits of info regarding things like this. With the Amazon as being touted as the lungs of the earth, it seems relatively obvious that there's a large spiritual side to this. I had thought about a cleansing as well. I guess I never anticipated it in somewhere so largely important.
Reactions: Lila and June

One of the interesting things about the Amazon rain forest is that it gets nutrients from the Sahara - the great winds blow dust all the way across the ocean.

The cycle of fire is frightening for us because people live around forests and woodlands. Here we have a number of preserves, and sometimes controlled burns are necessary for a healthy environment. The problem is that we humans have built next to these wonderful areas so what is a natural cycle becomes life threatening.

The situation in California is another example of people not managing their interactions with the natural environment. If you are going to put in power lines, then they must be maintained properly. A few years ago here, after a huge fire in another neighborhood that was started by poorly maintained transmission lines, there was a big push to clean up along other lines. We have a wooded area behind us and trees had grown up into the lines. The crew was here 2 days just for our little stretch. (I did talk to the trees before so they would know what was going to happen.)

It is a large and complicated situation with many moving parts. Can we live in harmony with Gaia? Yes, if we are not jackasses. Are fires a necessary part of the life cycle? Yes, so think about that first rather than expecting Gaia to bend to our wishes.

One of my favorite sayings (saw it on a bumper sticker) is "Mother Nature bats last". It is a baseball reference to the batter who hits hard enough, often a home run, to bring all the players on base home.
Reactions: Alain, Lila and June

Two months ago I saw a documentary (kind of) about new archeological discoveries there. The Amazon had been settled by 20 million people who built this as a giant garden which was a "Terra Preta" (a continously fertile fruit-bearing soil), so there is lots to be discovered in the ground.
And then of course there is the shamanic "hospital" which also burns down. So many healing plants that are not even yet known.
Unfortunately it will be falsely used for political propaganda by the CO2-cultists.
This is all very sad. Let's pray to keep the damage as small as possible.
Let your Truth be Authority rather than Authority be your Truth. - Sinera Arenis
Do or Do Not. There is no Try . - Master Yoda

Most doctors continue to practice with comfortable indifference. Some see the errors, damage, and limits of their practices but still walk lockstep with the herd and protect the brotherhood. I don’t know what it will take to get these doctors to resist the dictates who rule over them. I’ve had far more success reasoning with parents and intelligent people who are not attached to traditions that are damaging, unscientific, and not even supported by our own medical literature. - Dr. Suzanne Humphries
Reactions: Alain, Lila and June
O

I am going to send white light and love - and pray for the highest possible outcome.
Reactions: Alain, Lila and June 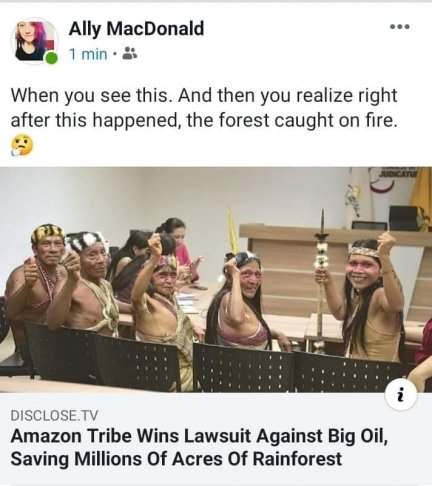 Here is another view. Right now there are more fires burning in Africa.

The statistics are interesting, but the analyst side of me wants something more complete to rule out "cherry picking" data.
Reactions: Lila and Laron

when i heard of it yesterday at work i thought seen the sheer mass of fire, they did again their heat weapons as the place is an ever wet place
Reactions: June

I'm shocked i tell you -- shocked...the terminally greedy and barely human are at it again? Rhetorical...A seemingly quite competent analysis...

David Topi also has info on these fires.


The cause of it? Several and different. On the one hand, human greed, economic motives and interests, the unconsciousness of not wanting to see or understand that without trees and plants we are literally "dead" as a species, that without oxygen we will not be able to breathe and that without the vegetable kingdom we can’t survive. On the other hand, negligence, carelessness, wanting to obtain economic benefits and profit with the lands and burned areas, wanting to expand virgin lands for commercial activities, etc. Also, the "revenge" between humans and groups, reprisals between people or localities, mutually burning areas of cultivation or grass, for a thousand reasons that have a thousand stories behind each of them. Finally, and one of the most important at the moment, the orders and guidelines given by the power circles of the control system on our planet to alter, cause all the commotion they can, manipulate and continue to generate as much chaos as possible due, in part, to the actions taken in recent months against their “superiors” (the different races “in control” - although they are less and less) and, in part, to the need to maintain a growing human population in vibration and in consciousness, on drop count but without stopping, altering all possible aspects of all possible areas of life in our society.​
https://www.transients.info/roundtable/threads/amazon-fires-“karma-octaves”-and-biosphere-reforestation.7187/#post-50295
Reactions: Pucksterguy, Alain and Laron

Aside from the optics, the Amazon fires are actually within yearly average, currently below.
https://www.thegwpf.com/nasa-amazon-wildfires-below-average-rates/

Note the data comes from NASA, the biggest climate change/global warming/global cooling/ozone hole/etc cheerleader (depending on decade) of all...

So, MSM and climate hysteria politics have been hyping up the "fires" as evidence of "climate change". Also political, as Bolsonario is Brazil's Trump.

Sorry, its pretty much the cycle of life (mainly the deforestation caused by Amazon native farmers, but in reality, pretty normal).

In CA, the fires are "caused" by zealous environmentalists vehemently against forest management (similar to weed garden management, except on a geographic scare). The idea is to thin out the old dried out trees and create defensive lines near residential areas to minimize the extent of damage. Instead, we have huge wildfires across Napa. And yet they blame PG&E 100%.
Nature does this by itself to remove dead trees, instead we end up magnifying Nature's intent.

Not to mention in drought country, CA has to block billions of gallons of fresh water from consumption, all for the sake of several minimal animal species such as the delta smelt.