Transcript of Alan Watt's synopsis:​
​
In the movie, "2001," Arthur C. Clarke, very high Freemason gives you the agenda of High Freemasonry. Not the "schmuckdom" freemasonry but the high stuff. He gives you their agenda and their philosophy and their religion in the movie. At the beginning of the movie "2001," made in the 1960's, they show you the ape-man, you know the hairy guys supposedly, and the new guys are terrified of the darkness. They'd go to their caves at night, and in the morning, they go across the watering bowl and meet this other tribe of ape-men. They shake their fists and go through a little dance, a song and dance, and then they muffle off on their own separate ways; and that's how things have gone on forever. The little sequences around—they're showing you there's a big part, you see, it's part of their religion. ​
​
You'll understand all this later; and this way, you've got a tree brush shaped like a big snake you see, and some of the emblems - these are actually Masonic emblems, high occultic emblems you see all through it. Even though the story eventually goes into space, it starts with these cave-men and an obelisk comes down. There's this black obelisk. ​
​
In the book, it's more detailed. The obelisk throws its cave-men out, one by one, and makes them jump around and stuff. It's testing them out to see who's got the best smarts. He picks one of them, and one day, the watering hole, and instead of going over and shaking their fist and screaming and having to drink more and go home, this one picks up a bone; because the love of the skull and the cross bones of Masonry, the pirates, right. He picks up the thighbone and then he smashes his enemy over the waterhole there and he kills him; and that's telling you that's their right of might. The right of might: He will kill a superior and then they give you religions for being meek and mild. They teach another one for themselves. ​
​
Progress. You see they have a thing called "progress." They hate something called stagnant civilization, "arrested" civilizations; and to them it's a progress. Progress to them is done through those who are willing to kill and become the top chutzpah of the king—king of the ape-men. Then it jumps from there into the future to the year 2001, and then a space journey encounters, supposedly, on the trail of this obelisk that they unearthed. It ends up on Jupiter; but it's all occultic. It's nothing to do with space travel. There's a Masonic initiation in it. You will see the computer HAL on board the spaceship traveling to Jupiter. It kills off two of the guys that are with him and then tries to kill off the third guy. He outsmarts it and disables it, meaning he overcame all the natural laws. ​
​
HAL is the son, like HALOGEN, you know, HAL-CYON. HAL and H-A-L, one letter after each one in the alphabet is IBM, you see. IBM, you speak it and it's I-beam, the beam from the eye, the eye of Ra. The beaming from the eye is between the pyramid, the capstone and the rest of the pyramid. ​
​
Everything is shown to you. It's not necessary you understand. It's only necessary that you think you understand, whatever comes out of these movies, chomping away -- "ah it's a good movie. What's next? Have no idea what it means." ​
​
Then "2010" is a follow-up to the movie, and it shows you what's supposed to happen in 2010. There's a big thing at the end, where this guy who escapes the computer remembers in the next movie he's timeless, he's ageless, as he's become a god, because he overcame HALCYON, you see, the sun, the natural order. He overcame all the laws and he's a god; and a new sun appears in the sky, but "as above so below," so a new sun will appear on the earth: A messiah, a being, an entity, whatever it is. They bring force to you with much hullabaloo and fanfare I'm sure. ​
​
They're telling you their system. They show you their religion from evolution, which is their belief system both physical and spiritual, because they do believe in reincarnation; but they don't believe that everybody reincarnates. There's a whole theology behind that, even though encouraged to believe in it amongst the lesser, as they call it. They have a different belief system for themselves, a specialized one; well, naturally, that's a special one. You can't foresee what is everyone else. So there's the physical and inbreeding which is terribly, terribly important to them because it's part of the "spiritual recycling," you might say, of the same dynasties within dynasties; and that's what they claim gives them their power and intellect and the right to dominate.​
​
​
​
Last edited: Aug 27, 2019
Vibrate in accord with the universal notes​
​
I see it's time to change my signature message. Out with the old and in with the new! ​
Reactions: Lila
OP

I started this thread about Arthur C Clarke's sci-fi book series because I'm currently reading the last one (3001) and it made me question whether Arthur C Clarke was a high-level Freemason - which I found out he was - apparently 33 degree or higher, and also there are some features in the book I would like to discuss.

The series of books are:

2001: A Space Odyssey (novel developed after the successful screenplay and film of the same name)
2010: Odyssey Two
2061: Odyssey Three
3001: The Final Odyssey

As you know, the first two books were made into hit films (could also be called cult films), the first directed by Stanley Kubrick in 1968.

(2001: A Space Odyssey is a 1968 epic science fiction film produced and directed by Stanley Kubrick. The screenplay was written by Kubrick and Arthur C. Clarke, and was inspired by Clarke's short story "The Sentinel" and other short stories by Clarke. A novelization of the film released after the film's premiere was in part written concurrently with the screenplay.) - https://en.wikipedia.org/wiki/2001:_A_Space_Odyssey_(film)
Reactions: Linda

Hey, I did not know the last 2 novels existed.
You've got me interested.
Everybody all around the world - Gotta tell you what I just heard
There's gonna be a party all over the world
I got a message on the radio - But where it came from, I don't really know
And I heard these voices calling all over the world
Electric Light Orchestra
OP

Reading this is a work in progress, because I actually haven't read the first 3 novels, but I do own and have repeatedly viewed the films 2001 and 2010. What I wanted to bring up for discussion is that Arthur C Clarke uses his novel 3001 The Final Odyssey as a platform to share some views, namely that he debunks those 20th and 21st Century people who believed in alien abductions, sarcastically calling it the Adamski Disease; also debunked The Face of Cydonia on Mars; debunked reports of UFO sightings, saying they were related to ball lightning; and that such accounts that the UFOs showed purposefulness or even inquisitiveness was due to electrostatic attraction!


"...Although the "Aliens are among us" mania had already subsided when he was a boy, even as late as the 2020's the Space Agency was still plagued by lunatics who claimed to have been contacted - or abducted - by visitors from other worlds. Their delusions had been reinforced by sensational media exploitation, and the whole syndrome was later enshrined in the medical literature as "Adamski's Disease".​
​
He then goes on to say:


"The discovery of TMA-1 [Moon Monolith Anomaly] had, paradoxically, put an end to this sorry nonsense by demonstrating that though there was indeed intelligence elsewhere, it had apparently not concerned itself with mankind for several million years." TMA-1 had also convincingly refuted the handful of scientists who argued that life above the bacterial level was such an improbable phenomenon that the human race was alone in this Galaxy - if not the Cosmos."​
OP

2061: Odyssey Three involves a visit to Halley's Comet on its next plunge through the Inner Solar System and a spaceship crash on the Jovian moon Europa. The whereabouts of astronaut Dave Bowman (the "Star Child"), the artificial intelligence HAL 9000, and the development of native life on Europa, protected by the alien Monolith, are revealed.

Finally, in 3001: The Final Odyssey, astronaut Frank Poole's freeze-dried body, found by a spaceship beyond the orbit of Neptune, is revived by advanced medical science. The novel details the threat posed to humanity by the alien monoliths, whose actions are not always as their builders had intended.
OP

Here is the cover of the paperback I am reading: 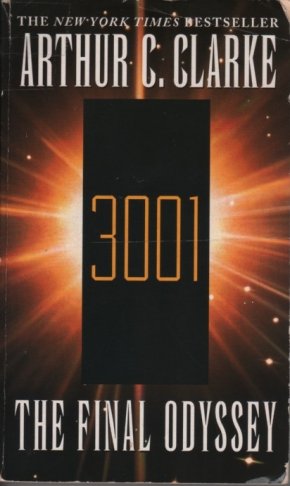 When I read 2001 way back in the mists of time, the original journey was to Saturn, where TMA-2 was found on the moon Iapetus. That was changed for the film and the subsequent releases of the novel. I have read the following three books, though it was a while ago now, I would have to re-read them to refresh my memory of them now. 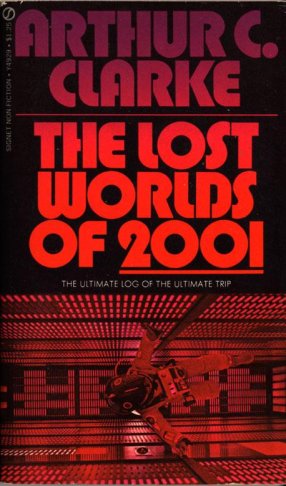 I see NASA is arranging for a probe to go to Europa :- NASA's Europa Clipper spacecraft is being planned for launch in the 2020s. The spacecraft will orbit Jupiter as frequently as every two weeks, providing many opportunities for close flybys of Europa.

Clip, clip, hooray: NASA says it will send Clipper probe to Europa, will attempt no landing there

Forget Mars, Jupiter’s moon could be where life’s at

Dear All, Monoliths are a topic of currency:


You need to know that the triangular, metal, riveted monoliths that have been popping up on Earth's surface world are all imitation - man-made. But the original rectangular, non-metal 3 metre high monoliths (9x4x2 in exact dimension) are something much more. By the way, Stanley Kubrick directed the 2001 - Space Odyssey films, but Arthur C. Clarke is the master mind who wrote the books, and thus was the original purveyor of this deeper knowledge.

Food for thought... I always considered the monoliths as the inevitable evolution of today's server farms:

It makes sense that our interstellar community would be close to that level of technology, as in Kardashev 2.0+.

I wonder if the real monoliths are now here on Earth to observe our evolution due to the Event.
Reactions: Lila and Hailstones Melt

We now have one down the road here:


Aliens or artists? Mysterious metal monolith pops up in Christchurch, the latest home to the global phenomenon​
"The three-metre object popped up overnight on Saturday at the Christchurch Adventure Park in the Port Hills." ... "Cam Hill, events manager at the adventure park, insists the company did not erect the monolith and says staff are baffled as to how it got there, appearing some time between 5pm on Saturday and 8am the following day.“We have no idea who put it there or why,” he said on Sunday. “The team discovered it this morning, it wasn’t there when they locked up on Saturday at 5.15pm.“We have a boundary fence and none of the locks were damaged, so they would have had to carry it in.”"​
https://www.stuff.co.nz/national/123769650/aliens-or-artists-mysterious-metal-monolith-pops-up-in-christchurch-the-latest-home-to-the-global-phenomenon​
​ 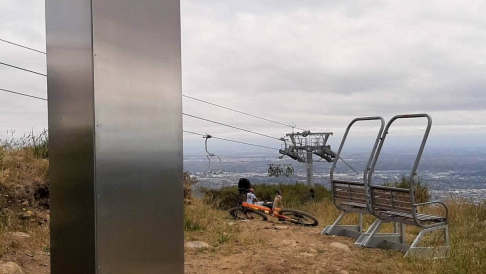