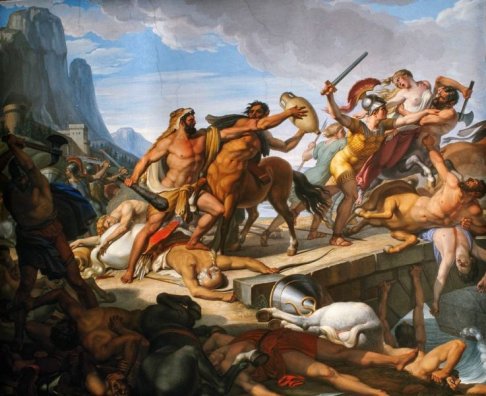 ​
As the total eclipse approaches all planetary activity will become part of the main event.

Today the Moon is Apogee which means she is furthest from the earth. This is a powerful position as there is a more focused energy pouring onto the planet from her rays than usual. I always think of a laser beam like effect on specific areas and people, as major events do happen with this moon.

And the force on the Tectonic plates is often very strong.

The moon is now in Pisces so the moon focus is mostly on the Fish amongst us, the sensitive Neptunian types who are bound to be feeling otherworldly, a little spaced out, even confused perhaps, with all the watery energy around at present, including that of Cancer where the Sun now is.

Tomorrow there are a few strong aspects such as Sun opposing the Centaur asteroid Pholus in Capricorn.

Pholus was an unusual centaur, a friend of Hercules, unusually fair, gentle and wise, being the keeper of the sacred wine. Pholus has a quality of opening the door to the infinite. When his influence is activated it's necessary to get out of denial and work with the energies, as something that has appeared a minor factor can in fact lead to something much bigger and usually, better.

Pholus is the catalyst and provider for a landslide-like change and turning point that comes upon us suddenly.
Some of his influence is generational as he has a relationship to addictions and the healing of addictions, as well as their causes and consequences which is passed down to us from ancestors.
So small cause, big effect. Pholus has the property of release, opening to fast-moving changes, or rapid transformations, initiated by one's own action, minor though it may seem.

This is very interesting as this happens in Cancer and Capricorn, so with the Total solar eclipse coming this adds to the influence of the unexpected to come which will also provide the opportunity for transformation for many, and globally too.
Especially strong for Capricorns and Cancerians.

Tomorrow Uranus in Taurus conjuncts Vesta, another influence or transformation relating to our values and security levels, helpful for finding new and inventive ways to use our best qualities and resources to keep ourselves safe while exploring any new aspects of self, as well as our previously hidden talents and abilities.

Taurean type people, also Aquarians will benefit most from this one.

Bear with me while I sort what comes next as it DOES all seem very related to all of the above and I know it is a LONG article.

Venus is, as to be expected in Gemini, sending out mixed messages as she has many aspects happening at once.

She is quincunx to Chiron in Aries so that is her in a wise healing mode calling on her depths to stay safe and centred and helping others to do the same.
(Geminis and Taureans, Librans too are among the signs to take note here, Arians too ).

There are certain warnings with this, bearing in mind Pholus is a strong factor in tomorrow's activities which are in fact already in action.

Venus is going to be very soon squaring Neptune in Pisces, so is in a somewhat addictive mode, so needs help to cope with all that’s going on. Venus is a little escapist right now and has some issues to resolve.(Pisces take note also).

And yet being opposite to Jupiter Venus will insist on throwing all to the wind and having celebrations even when she herself is vulnerable, so there are signs here for us all to take care of self while having fun and trying to find a middle way if possible. (This does refer more to Gemini, Taurean and Libran types as well as Pisces, Sagittarians and other signs too).

Venus is also quincunx Saturn so there are some warnings to take extra care and not to rush in where angels fear to tread, perhaps referring more to the Capricorns amongst us, but perhaps also, most of us should heed the warning that if having a lot of fun, try to be mindful of the consequences.

Venus in Gemini opposing Jupiter in Sag is one of the stronger aspects tomorrow, which is one of celebration, speaking of wine. This is an exuberant aspect of social interaction which includes activities such as dancing and generosity of spirit, which could lead to overindulgence as well but all in the apparent spirit of joyfulness.

So Geminis, Taureans and Librans . Sagis too will be in that sort of mood, wanting to get out and about and enjoy life without worry for the consequences. But consequences there could be!

So there is the hint of caution needed, so just be on the look out for wild and rampant Centaurs who may or may not be shooting poison arrows. And if feeling extra curious be careful not to touch anything you are not sure about.

On the other hand if you do want to touch or act on impulse, if it's just TOO compelling then be prepared for the consequences as it could be really lifechanging and lead you off into unknown territory!
It sounds like a bit of a gamble to me!

And to top it off the Sun is also quincunx to Ceres in Sagittarius telling us that its fine to want to care for people and bring everyone together, but sometimes the differences between certain cultures or social groups is a little hard to sort out and could have repercussions.

So to sum up keep your common sense in the coming few days and if you do decide to throw all to the wind due to something that seems innocent, be aware that it could change your life totally.

Depending on your own transits and nature this could be a positive or it may not. But it is certainly not going to be a dull time in the coming week.

"We are endless galaxies but we have seen just one star."
My Astrology focused Facebook Page: Neptune's Magic

Pholus sounds a bit like the pebble, or echo or even whisper that can start an avalanche... and since there's that bacchanalian merriment aspect in there, this sounds like it really could be interesting!
Reactions: Janne

The planet movements and their behind the scene stories are nice navigation tools for these days! Caution is in the air! I enjoyed the article.
Reactions: Lila and Janne
You must log in or register to reply here.
Share:
Facebook Reddit Pinterest Tumblr WhatsApp Email Link