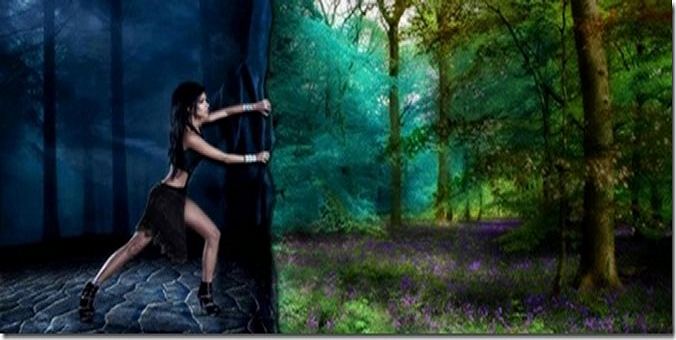 With the introduction of the reality change mechanism that we had explained in the last article, it seems that some ideas are taking hold, even if it is still generic, and although there are still questions about how it has to work, and get going, that step or evolutionary leap that has given so much to talk for so long.

As I think you can perceive, this evolutionary leap mechanism has ceased to be something “mystical,” abstract and “spiritual,” at least I hope so, because it has nothing as such. It is a purely “physical” and energetic process, in which one structure is placed on top of another, people are raised to the frequency level of the new structure, a “solid” door is created between both structures and the opportunity is given the person to cross it when it sees fit and is ready for it.

This last point is the one we are going to explain today. Why does not it go through the whole world at once? The answer is obvious, because not everyone has the same rhythm and will not be prepared at the same time. With the offensive of the last weeks from all the entities that are being extracted from the planet, with all the Asimoss and Amoss giving orders from their “dens” to continue blocking the level crossing, and with all the mechanisms of the control system underway for it, a great part of the people who are in the timeline 42 have lowered with the majority of their bodies to the first octave of the same timeline, being almost all the world, not all but many, back between the levels 1 and 7 of this timeline. So, again, some “frustration” (in terms terms) among the Higher Self groups, guides and protectors of that part of humanity for having descended several frequency steps that we have to go back up, calmly and steadily, and without losing the direction of where we are going.

Therefore, although the 15.6Hz physical plane was already ready, and I think we can confirm that the time has been reduced to about 10 years, because of the intensity that Kumar is giving to the solidifying octave of it, nobody yet could see and perceive the new “physical matrix,” nor could anyone see in their own home the gateway to it.

But this is neither good nor bad per se, it is simply the verification of the power struggle that exists on the planet by the unconsciousness and ignorance of most people of what is happening, and by the insistence of the races in control for not being thrown, expelled or deprived of this game board in which we find ourselves.

Since it is possible that in these 10 years (and reducing) that remain until the 15.6Hz physical plane has been completed, there will be only a few million people ready for change, the step structures will be created and will be permanently “open,” so it does not matter when a human being arrives at the right level to make the change, he can do it without problems, either now in the first opportunities, that is in 20 years or in 50.

What I want to say is that work is being done to make it easier for everyone to pass, that nobody who does the work consciously on their own and who decides to move forward on a “course” is left behind. The difficulty of the process is to raise the frequency of our energy systems, they do not let us, do not want to allow, much more than the problem that can be represented by the mechanics of building the structures for that jump. When the two realities are “aligned,” they will be “forever” (at least many centuries if Kumar does not change his current decision), and every human being who reaches a minimum vibration of 15.6Hz at the level of his body 1.1 can catch the door and exit the reality 7.8Hz and move to the reality 15.6Hz when is ready for it.

So, in general, this is good news, it has been taken away the pressure of having only a temporary window of restricted passage, of having only one period in which we must be ready, of the anxiety that could generate the idea that some will leave and others stay behind forever. What they have not taken from us is the individual responsibility that this process entails. Nothing will be done to force the passage of level by those forces that assist us of people who do not want to do it consciously, but what they have decided is to maintain indefinitely the passage bridges and the two interconnected realities so that, whoever wants, whenever he wants, make the change.

Thus, the first few hundred thousand people who get in these 10 years to be at the right level may be part of the first wave that will perceive the superposition of both realities, and will be prepared to abandon the current one and move to the new. Then, more and more people that reach that level will be coming, and, little by little, more and more. We will have to leave in writing all the information and knowledge that is now transmitted so that those of us who will leave in those first waves can move forward, while those still in process have the necessary material to know what to do at each moment during their preparation.

Therefore, we must move forward, reviewing the requests for upload and deprogram that we have published since last year, continuing with the healing and elimination of blockages, recovering the lost ground again due to the number of attacks and manipulations that could have been able to reduce the frequency again, and resume momentum towards level 21 of the timeline 42 and towards the last octave of the timeline 33, which will be the prelude to the change to 42 as soon as the separation barrier blocking both lines can be removed.