New delivery of the answers to questions received through twitter.

85 Good morning David, thank you for joining us in this whole process. Is it possible for the body to become ill as a resistance to the deprogramming we are doing or as part of learning? And if so, what should we do, stop, start from the beginning or continue? Thank you.

In the therapeutic field, there is the concept of “healing crisis” when the physical, organic body is freeing and letting go, transmuting or releasing all the energy that has been liberated during the healing of one of the other subtle bodies, and it is that is why there are people, and this is different for each one, who feel very tired, who have a little fever, who have discomfort, or who are very upset during the “expulsion” of everything that has been healed. The deprogramming, occurring in the mental body and in the mental spheres, does not release too much energy that could make the physical body slightly sick, at least by itself, but in the process of eliminating a routine, a program, a mental block, other things appear, blockages, “stagnant” energies, which are also removed with the request, then it is possible for the person to notice that “healing crisis” temporarily, no longer for the routine or program eliminated as such, but possibly, and almost certainly, for all that that deprogramming has carried with it, which can be from karmic memories, trapped emotions, energetic “cysts” (accumulations of compact energy), etheric implants, etc., etc. So when the physical body is releasing or in the process of recovering, it is best to stop deprogramming for a few days, regain balance and well-being, and then continue without haste to allow all bodies to work and be in harmony and without too many alterations.

86 Hi David. Is it possible that my physical body could have been located on line 42 and my mental body still is on line 33? That’s how they showed me… It does not seem logical to me, but maybe it could be that way, that’s why I ask. Thank you.

In general, the mental body always tends to be at a higher level of vibration than the physical body (in its energetic counterpart as we have explained in other questions), the etheric and the emotional. But, if for whatever reason, on a mental level you have suffered some vibrational “slump,” it is possible that you have reduced your frequency and have reconnected with line 33 from this body. If this happens to you, and it does not correct, sooner or later the mental body anchored to the 33 will pull the other bodies and end up dragging them all out of the 42. In general, one thing you have to ask your Higher-Self, is if you have been artificially “anchored” the 33 “tying” your mental body or any other with energetic threads to this line, to cause the fall of the entire energy system towards it. Like a fishhook, basically, from which a body is lowered and the rest, by resonance, they follow him. See if it is so, make requests to remove the anchors or hooks that you might have, and re-execute the blog requests to re-upload all your bodies back to 42.

87 I would like to know the order of the bodies that we are composed of and their subdivisions. And how to go about healing each one. Thanks.

As we have already mentioned, the human being has 9 potential bodies, five of them come in “series” for each incarnation, and the other four are developed thanks to the inner work and growth of the person. In this article you have them explained:

Then, its subdivisions are more or less as follows. The physical body, which you can “touch” with your hands and senses, is made up of 7 layers, layer 1.1 (that is, the first) being the “solid,” the chemistry, the organic, which everyone would call “physical body.” Layer 1.2 of the physical body is already an energy coating of the “physical” layer, as well as 1.3, 1.4 … until layer 1.7. In this way, the “solid” body has a “solid” layer and 6 energetic layers that cover it and provide different protections, functions and means to carry out what our body needs to function.

Then, the etheric body has the same composition, 7 layers, each of them with a higher level of vibration so that layer 2.1 (if we assign the number 2 to the etheric body, the first layer would be 2.1) is the more “dense” of the etheric body and layer 2.7 the less dense of it. Here, for example, the system of channels and meridians, chakras, tantiens, etc. are located.

The emotional body has no layers, it is a continuous “nebulous” amorphous energy where emotions are perceived as “clouds” of colors, according to the vibration of the emotional forms present in it. The mental body has 4 sub-layers: the conscious layer, the subconscious layer, the unconscious layer and the superconscious layer. Why we have only four layers in the mental body but we have 6 mental spheres I leave for another time, because it has to do with the manipulations suffered in our structure when the Anunnaki built or modified our physical body and energy system.

The causal body has the same structure as the mental body, four sublayers but at different levels of vibration. Then, the rest of superior bodies: superior or buddhic emotional, superior or atmic intellectual, superior or adic spiritual and the solar body have another similar structure but that, since it is not developed in almost any human being, its study is not useful at the moment.

88 What happens to you to liberate and transmute all potential future created by all creative errors, by all erroneous beliefs, by all emotional conflicts, by the past, by all fear of the past or the future, by any lack of acceptance of the past or from the future? Regards

There are no “mistakes” from the point of view of our Higher-Selves, because we have already commented that there is no value judgment associated with anything we do. Everything is experience, if something has gone “different” to how the personality had foreseen, it is not considered to be a failure, a problem or an error, but learning. Basically it is about learning that nothing is “wrong,” nothing is “right,” everything is subjective to the interpretation of the moment and according to the programming that the personality has and the processes of his ego program to decode it.

Change something that is perceived as an error, which can create a potential future that the personality decodes as negative, passes by emitting and creating a new mental scenario that then manifests a correction for a situation X, so that you project what, at that moment, you believe that it is correct. The key, in my opinion, is to stop perceiving things as good or bad, simply, everything that happens is what it is and, if we want to change it, we have to make it happen in another way, without the emotional or energetic attachment that sometimes we put on things. I’m not saying it’s easy, we’re all learning to co-create the world we live in starting with our personal reality, but when you realize and verify for yourself that everything can be altered, changed and modified at will, you stop worrying to some extent by how things happen, because you can always recreate in a different way similar situations that provide us with the necessary experience from the other “polarity” or point of view.

89 Do you think we can access the memories and information of my futures, and with the answers, the information and the solutions of the memories of my futures, release all potential future created, induced or empowered by the past, poorly memorized, poorly projected, misdirected or that does not serve my greatest good? Regards

Since everything is happening simultaneously, and so it is perceived from the structure of the higher planes of the planet from the causal plane, you can connect through your Higher-Self with any other version of yourself at any other moment of time and “chat” with yourself. I have done it hundreds of times, here is a way to do it, and you “give clues” to yourself about things that have happened from your spatial-temporal position to the space-time position of the version of yourself that you are connecting to.

The only thing that must be taken into account is that there are thousands, literally, thousands of versions of oneself in the thousands of possible micro-futures that we have, so if you connect with one of them within the timeline in which you are, on one of the sub-lanes of that time line, and you give yourself tips or clues of things that can come in handy, or you explain to yourself facts that your “future self” considers to be in your past but for you have not happened yet, then it is possible that this does not happen to the version of you that you are now, if again, your decisions take you through other temporary sub-lanes that prevent you from going through the events that of one of your possible futures told you they were on your way. Look at the image: 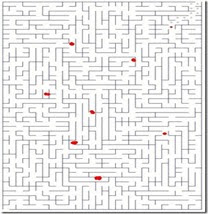 In the first one above, your sacred plot is represented and in it, all the points of space and time that you have codified for this incarnation. If you want to talk to a future self, you just have to ask to connect with one of those points for which you, from your current perception, have not yet passed. But then, after the connection, your decisions, your ways, your choices, make you go through a future different from the one explained to you by your Future Self from the position it was in when making the connection, so that, then, “you” do not live what was explained to you but it is another of your multiple versions that is doing it, without it being a bit false from what you explained yourself in the meditation and previous exercise.

(Laron: For previous articles of answers to the questions many have been sending in, just check out David’s author profile here on transients right here. For information on how to ask David a question, see this article here, and note that David is accepting questions from me over email so feel free to ask a question in the comments of this article, or just contact me directly with it.)

The article above has been translated from Spanish to English by Carl, one of transients’ community forum members, over on the Roundtable. Editorial changes made by Laron. David has given transients.info direct permission to share his articles in this manner.

Thanks again @Carl for the translation!
Click to expand…

You are welcomed Laron!