Last week and the previous week have been prodigal in new crop circles, which have appeared in several locations in Europe. As in previous occasions, and as we said in the introduction, we are going to give a few brushstrokes about the reason for their existence and appearance, to understand more what is happening on the planet.

It might seem frugal and a superfluous exercise to attempt this decoding, in fact, the decoding that I publish to you is not an interpretation of mine, but comes from the information that all the Higher-Selves share among themselves, and to which every human being can have access, as we have explained many times, when you, from your level of personality that we call the observing I, have access to the consciousness of your Higher-Self. The fact that all the Higher-Selves “speak” among themselves to share what happens on the planet that serves as “game board” allows us to understand the movements that, on the one hand, the so-called “elite” and the system of control under which we live prepare and execute and, on the other hand, those that we have called the “pro-humanity coalition” (and if someone has another name to name this group of races that assist us maybe it would be good to change it) try to prevent, or counteract and also, balance, cancel or re-harmonize.

Thus, with the images that have been published of the last circles that appeared in England, France and Switzerland, and we will see why, we will understand better the plans of some and the countermeasures of others, although from the “human” point of view and the personal one from whoever is reading this, we are a bit far from bringing to light the concept and the reason for this work and the processes and octaves that occur between the “macro players” that right now pull both sides of the evolutionary “rope”, one towards manipulation and destabilization, control and the attempt to keep the system tied and stable, and others towards dismantling it, at least for line 42 and at least to preserve the stability of the Earth as a planet in their physical, etheric and mental realities.

These two appeared a day apart, the first, created by the control system, with little definition, in a hurry, due to the rupture of the etheric lattice of the point or vortex of power that is right in the center of the drawing. This drawing acts as an energy “blocker”. 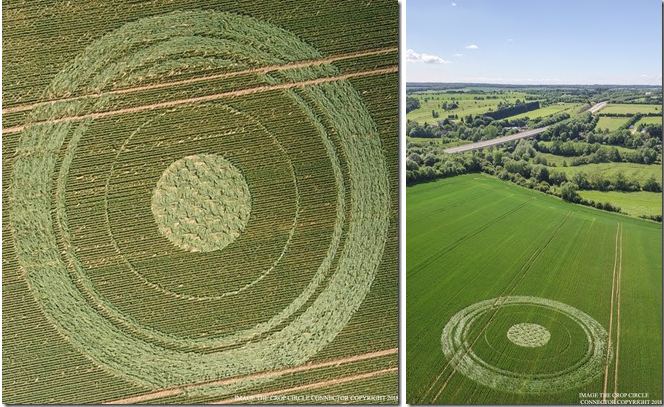 The second one, with much more definition, doing the same, but created by the groups of the coalition that assists us, because the rupture was really important and the equivalent of an energy leak in a subtle body of the human being, but in the etheric structure of the Earth. So it’s something like, in a very rough way, putting an etheric “band-aid” on the vanishing points of prana that was pouring out. An uncontrollable water leak in a pipe at home is a good equivalent to understand it. 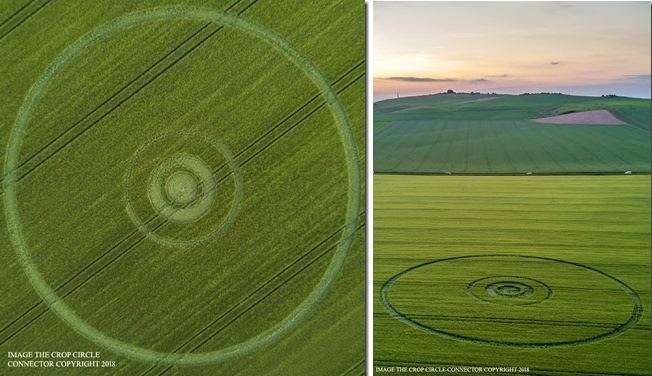 In this case, the “etheric” break was caused by attempts by the control system to derive all the energy from a nearby tantien or “battery” to use it for its goals and purposes. We had already explained in previous articles how they use this energy to manifest mentally and then etherically those scenarios desired by the elite, which then “fall” and crystallize at the physical level as the events we see in the news.

This other circle, created by the groups that assist the planet, is a generator and frequency elevator to restore the damage in the ethereal matrix of the area where the damage and breakages of the previous days took place. 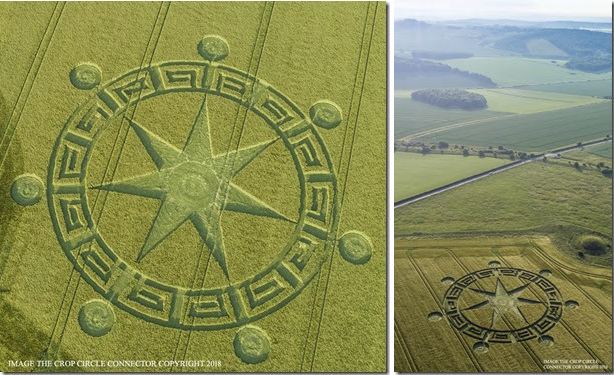 The star pattern is “fixed” in the physical plane, impressed on the crops, but is rotating in the etheric plane, creating a vortex that spins at a high speed, like the blades of a helicopter, to make the energy of the area “ascend” and raise and dissipate, as a fan does, the unwanted energy concentration produced by the previous break.

This circle is an attempt of the control system to minimize, confuse and create confusion regarding the process of crop circles, their intention and so on. It has appeared in Switzerland to confuse and blur the idea that England is the center, one of the most important, of the planet’s power, bringing attention to another, more “neutral” country. It tries to represent the concept of something that is orbiting or moving around the Earth, implying that it is a message or a warning that something is approaching that will go by near us. The interior of the circle, with little definition by the technology used, which is inferior to the “printing” technology that other groups have, wants to represent a part of the Earth destroyed by it. It is a “drawing” to speculate with possible and future disasters coming from threats “out there”. 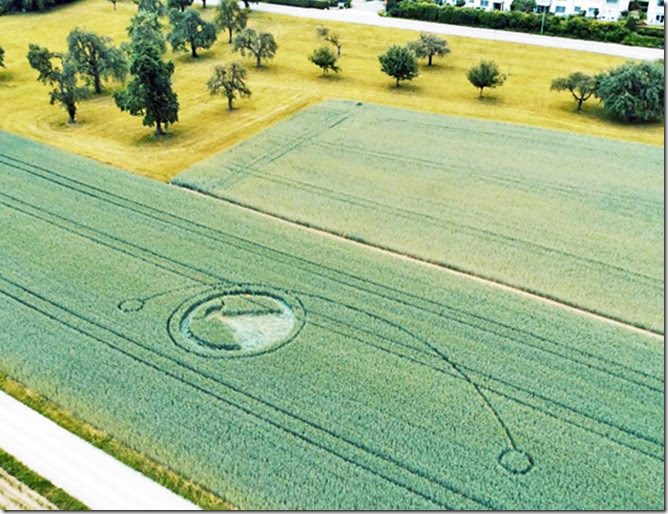 Also created by the control system, insisting on obtaining and deriving energy towards the planetary accumulators that are under its control. The “blades” of the drawing that are printed and “fixed” in the physical plane in the crops, are spinning vertiginously in the etheric plane, held by three etheric pillars that fix them to the structure of this plane on the planet.

First circle that appears in France this year, and has the same intention as the circle of Switzerland, to take the attention out of England, and to give a topic for comments from the international community and to the people as a distraction.

It shows what appears to be movements in the Solar System, changes in planetary orbits and turns and global destabilization processes that seek to sow the idea in the collective unconscious that the Earth could, again, be affected by something “external” that is about to arrive. The technology used, again, is what the “delegations”, let’s call them that, of the control system in this country have, where all services and agencies under military control submissive to the power behind the scenes have the ability to impress this type of messages in crops, leaving to the human imagination its interpretation, based on the concepts of creating confusion, fear and distraction. 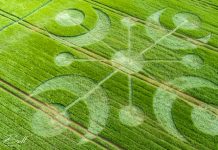 Crop Circle in Buckland Down, Dorset (England) from May 26 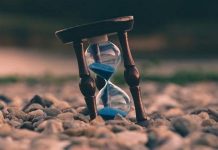 Programs that Slow Down Situations and Events of Our Reality

The Source of Crop Circles & Decoding one at Willoughby Hedge, UK