A few days ago a new crop circle appeared again and, as we had mentioned in this introduction to its origins, who does it and why, we are going to decode it and explain its meaning. You can see the photos in this link of the Crop Circle Connector page where they are archiving and reporting all those crop circles that are appearing, and that are being discovered by the owners of the fields and plantations where they are made, or by groups of people already directly involved in their search, with technology even at the level of drones to supervise the places where, in other years, other patterns and drawings have appeared.

This one that we explain today appeared last May 26th in Buckland Down, Nr Cerne Abbas, Dorset (England). We have already mentioned that most of them tend to appear in Europe, and a great number of them usually do it in England, something that, in itself, would raise suspicions, because it is not due to the lack of grain fields scattered all over the world and thousands of spaces to impress them all over the planet. However, and for many this will come as no surprise, most energy “imbalances” and manipulations of the life system on Earth are executed by the powers “in control” whose “bases” and “logistic centers” are located, most of them, in this country, making manipulations of the mental and etheric structures that are modifications to manipulate reality, are also made from this point of the globe (from others also, other countries also have their centers of control and manipulation directed by the badly called “elite”, but England has a high concentration of them).

Therefore, when it is necessary to introduce an energetic correction for something that those in power and in control of the life system on Earth have done or provoked, it must be done from the physical point where these “elites” have part of its bases, and from where the distortion and manipulation has been created, so that the correction is introduced in the points closest to the origin of the “disruption”, this being the explanation of why, when the crop circles are created by some of the races or groups that attend the planet and to us, as in this case, almost all appear in the same places.

A pattern of energy containment 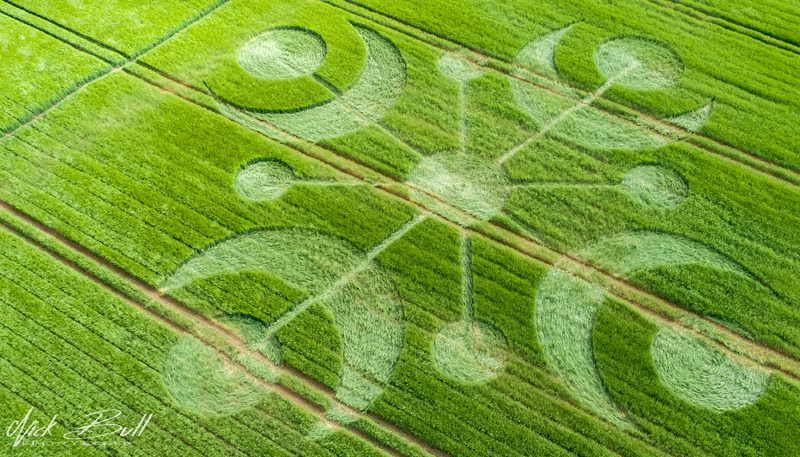 As you can see in the photo, we have a geometric drawing that has or resembles several lines that converge in a central point, not at all different from the first crop circle that we explained in a previous entry, with the difference that, if that drawing and geometric pattern facilitated the connection of several energy flows in the “plumbing” of the etheric plane to one of the power points to endow it with the potential to start several events in the mental plane, which are now trying to fall to the etheric, in this case, this other pattern impressed a few days ago, slows down that different energy flows that pass through the area be diverted to the same point of “power” used by the “elites”.

Therefore, this drawing pattern is intended to affect the ethereal energy lines of the area, not being in this case any encoded message to be transmitted as in drawings from other years, except for the need to print on the physical plane the patterns that have to affect the etheric so that these are fixed to the structure and do not dissipate so quickly, doing so in a way in which we can understand what is happening when decoding it.

Returning to the diagram, what appear to be four crescents are four four-point containment barriers where etheric distribution channels of “prana” converge, the vital energy of the planet, in this case, channeling very negative egregore streams present in the energy structure of the Earth to be channeled to a central point where they could converge into a huge etheric “battery” (one of the secondary tantiens of Earth that is in the area) to charge it with energy that could trigger processes not too positive for line 33. The effect of the half moon is to reverse the flow and direction of the channeled energy returning it to its point of origin and preventing it from accumulating in the central point of distribution where there is a vortex, which, as in the previous case, functions like an etheric “tap” ” to let pass the energy currents that circulate in that space. 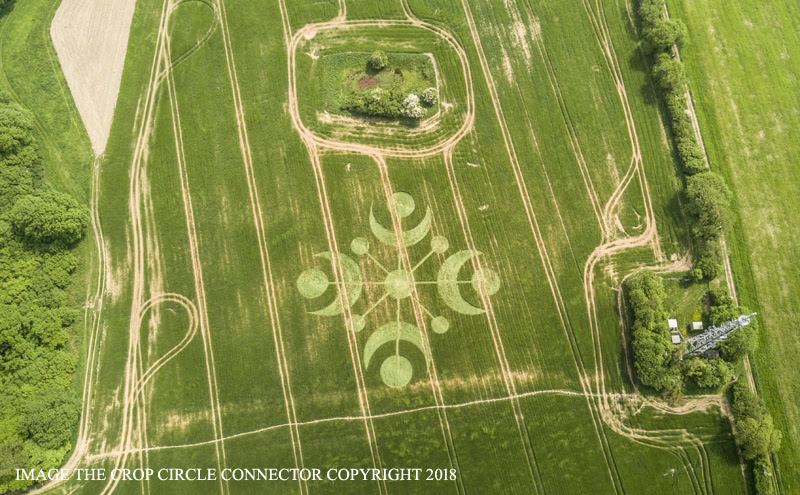 By blocking with this pattern those energy distribution pipes, and fixing the structures of the drawing to the etheric plane with the other four interior points that act as fixations (remember what I explained in the previous entry on the structures that support the processes and elements in the different planes of the planet), for now, and if nothing changes it, the circles in power in that area have been left without the possibility of accumulating the energy they need for the manifestation and “crystallization” at the physical level of some of their plans in process of gestation now at the mental level.