I just wanted to check in with everyone following or taking part in our weekly remote / distant healing sessions that we started back on the 3rd of August, 2013. We had a lot of feedback in week one and week two. You can find the feedback for week one here, and also here within the original session article. 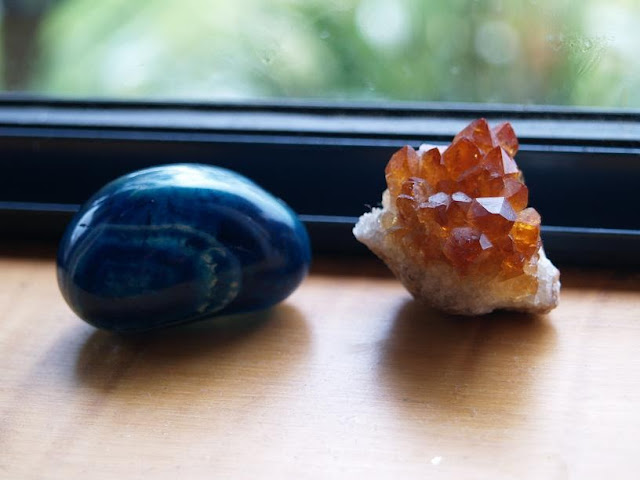 A picture I took of two crystals I borrowed and had with me for today’s healing session
In today’s session (today where I am located) we had around 17 people attend from various locations around the world. A few took part before the actual allotted time and scheduled their healing to take part during in. Our focus is always first to send healing energy to those taking part in the group, but a whole lot more does go on behind what I like to now term, the conscious scenes.
For some of us, possibly not all of us, consciously, we have had the secondary focus and intention of sending healing energy to the situation in the Pacific Ocean with the radiation leakage from Fukushima.

Unconsciously we have had feedback from multiple people showing us that we have also been working with the energy in relation to the planet Earth and also the ‘veil’, or in other words, the vibrational frequency that separates us in the third dimension to that of the 4th and 5th dimension.

Before I continue, I will mention that today I had the feeling I needed to share with you something that came to me. When we are in a meditative position or remote healing position which is sometimes similar to a meditation position, we may experience some discomfort or pain.

As an example, we should really be sitting with our back very strait so that the energy can flow through our energy centers in a more efficient manner. (unless we are using a remote healing bed or another method where we need to move around a bit) From being stuck in the one position, we may feel discomfort in a part of our body, such as our back.

Whatever the cause of the discomfort is while performing healing, you should change your position so that you do not feel any discomfort. Don’t worry about the interruption to what your doing as its more important to be comfortable, so if you have to lay down to continue, this is perfectly alright.

Before I get into feedback from week two(today was our fourth week), I wanted to mention the process that I go through as the host of the distant healing sessions. Once I have positioned myself and closed my eyes, I then clear my energy with the column technique which I have mentioned in this article, ‘Clearing your Energy and Energetic Shield Visualisations‘, then I perform a quick relaxation technique. I then open up my chakra energy centers.

I connect into the group then, and perform a type of protection visualisation for the people who have told me they are taking part. From there I bring the energy down from above and start the session with my intentions and I also ask for assistance from those beings outside of our dimension, who are willing to take part. I may have one intention first off, and then move to my other intentions during the sessions.

Feedback for the remote healing on the 10th of August

I am going to now cover feedback that we received on the official remote healing article for the 10th, but also mention a few things that people sent into me via email, as some of the feedback was detailed and very interesting.

I will start with what I received, which was,

“I first had the impression of the ocean, and thought I could hear it for a short period of time.”

“Had an image of the earth with something wrapping around it. It was first… a narrow band of something, possibly a light brown/yellow/orange in color. It was only taking up about… an eighth of the space around the earth. Then that expanded out around it so that the whole earth was covered.”

“Had an image come to me of a funnel of energy going straight up above me, like a twister but not like a twister… had the color orange pink in there and at the top was like.. a whirlpool with different shades of darker blue. “

“I’m now in the sky seeing the wings of a large bird. The wings are wide. Brown colored feathers. Cloud is everywhere in front. There is an opening and I look down… I get the impression it was the building structure of Fukushima.”

One of our healers had a being appear beside them, which emanated both joy and love. (This was their first time experiencing such a thing) The person was given a message, “We are here with you.”

One person sensed that there was a specific group of beings who asked to be provided with some of our groups healing energy as they were in need of more. The person was told that the planet also required more energy.

Another person mentioned that they sensed that the first two sessions were actually happening simultaneously because of how time works on a higher dimension / plane of existence.

One person had a direct impression that one session was based around feminine energy and another session was based more on masculine and they were merging at one point. The healer felt that some of us are here to bring this balance to the World.

One healer felt that for some people, emotional scars were being worked upon and healed/repaired. They also had a direct impression of our remote healing group joining hands and surrounding the Earth. A message they received around this was that we were standing up for the Earth and taking care of her.

One person received a message saying ‘This is a grid shift’, which accompanied an image of an older Earth being replaced with a fresh Earth.

A number of people mentioned seeing the Earth being healed through various depictions – images/scenes being shown to them.

Iris reported having this experience during the session,

“Immediately I was out in space, watching our group in the form of a human begin to light up, like stars in the indigo darkness of the human shape. It was like we as One Human were the same color as the indigo sky, but the lights awakening within us defined our shape. I was told it was the crystalline-based structure lighting up in response to our gathering. When the form was completely “awake”, it turned, gazed at Gaia and then took its position above Gaia like a sky vault. The closest thing I can use to describe this is if anyone knows how the Goddess Nut is portrayed. Our Form had the same position and coloring as Nut.

I watched as the energy was sent from our Form to Gaia, and also watched it circulating within itself (I take that to mean those of us that chose to be in receipt). I sent energy within this Form for the first part, and then gratefully received for the second half.”

Wren had this experience below which I loved to read about. This is Wren’s first experience taking part in a remote healing group,

“As I was looking up, a dome of white light was appearing when very dark clouds moved in and nearly obscured it. The light was stronger than the clouds, which eventually dissipated. Still, the white light was having problems flowing down. It sent out sparkling ribbons and lightning and finally, with a great surge the light pulsed through whatever was holding it back, and down. As it came down, I could see it was pressing through some kind of density.

I couldn’t send out. This isn’t surprising because my energies have taken a beating lately…. The energies coming from the group in front of me were very strong so I relaxed into it and out popped a little me, dancing in a sparkling circle of white light. Adding to the mix came a bit of blue and red light that fried that little figure of me to ashes.

When the group joined hands creating a funnel with me at the narrow end, I was able to begin receiving the white light that was surrounding me and sending healing energies out in return to the group, the world after which the group left me on my own, the universe and to family members, one person/couple at a time.”

For those taking part in these session, I do highly encourage that you share your experiences, no mater how mundane, strange, simple, random, weird…etc, they may be for you. If something doesn’t make sense, it may make sense to someone else. Someone else may have had a similar experience and together you may find a confirmation that what happened was real to both of you.

There was another situation that occurred with three healers which I can’t really go into the details on, because of the privacy aspect, but there was a confirmation for them because of what they shared with me privately. I was able to confirm something for all of them based upon the information and how it answered questions around their situations and experiences

I don’t have as much time as I usually do because I am on a long term holiday at the moment, but I am making this a priority so feel free to contact me with any questions or any feedback on any of the sessions that you partake in. Otherwise, just post your feedback within each weeks official post.

Laron, I just have to say they are two very beautiful crystals. Synchronicity there as wheel has come up a bit lately, and the other night I was drifting off, I thought about the balance of colours on the colour wheel – specifically blue and yellow/orange. Anyhow, they're lovely.

There was a bowl full of small ones here, probably about … 25 or so and those two stood out.

Thanks for the update 🙂 Love reading about this. This is important work that will be needed even more so in the coming days.

Nice to read all together. Gives me more meaning after reading about others and the way you presented to us Laron.

Wow! I told you this session was great! I felt that we were sitting in a circle in a dark place and rainbows began bursting from our hands and bodies. These rainbows then "pulled" the Earth "Up". Kind of like when you are in a plane and you are riding the runway… the plane is going faster and faster and you are still on the ground – visualizing the end of the runway nearing and thinking of the disaster it would be if the plane wasn't pulled up in time! But then the plane pulls up just in time before… Read more »