It’s my belief that Dreams are very important to remember and take notice of this year as some of us are most likely going to be contacted by our guides and higher selves more than any other year before in this life of ours, this time around because of this important period of time. Dreams are one of many avenues of communication for us to and from the spirit world.

I have a passion and interest in dreams and have learnt a lot about them over the years. I also do dream interpretations for friends from time to time.

A couple of days ago, a friend of mine who also resides in the Sydney area, woke during the night and quickly recorded her dream. It involved an experience, in what I believe to be a future time period after many earth changes. She was clearly shown a map of the World and what the Earth would look like, near the end of the dream.
There are a number of future maps of the World such as Gordon Michael Scallion’s famous maps and Nostradamus’s future maps as interpreted by Dolores Cannon her series of three books. I believe that being able to accurately predict the layout of the Earth at a specific point of time in the future with a high rate of accuracy would be a difficult task because of all the factors involved with the changes going on, on the Earth. But I think all of these maps give us an ‘idea’ of how things may turn out at that moment the information is brought to us. As over time, free will continues not only with humans but other beings interacting with what’s going on. I think the Earth could also have free will, based upon the theory of the Earth being conscious. 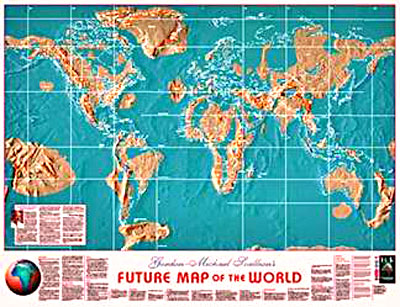 [Gordon Michael Scallion’s future map of the World]
When I was a kid, this map above was laminated and part of our house hold items. I’m not sure why my family had it and I never understood what it was until I started investigating all things 2012 back in 2004.

With her permission I have decided to post her dream here and a map she made up. Note this is information only on Australia and the south and south east areas of the continent.

My Friend Leo has had many astral projection related experiences over the years and from time to time has dream premonitions. I believe this is one of those premonitions, with a small number of those conscious day to day type memories thrown in of course.

The Dream
It’s 1.30am and it came back like a flashback, thank god cause I forgot it as soon as I opened my eyes.

There was a disaster, and me and a few others (I think my sis was in it too) were somehow transferred to the future.

We arrive in wasteland Australia, its nothing but dry dead hard land,  not even a twig in sight.

There’s colossal walls scattered around what looks like a plain or valley and they are made of stone or dirt, I’d guess erosion. On them there’s graffitti of love hearts and there’s a message written in them but i paid no attention. We make a joke if the “bedazzled” heart on one if the walls, I think that’s my mind humoring me in the dream.

We see a dirt road to the right and looking back I notice tyre marks and I get really excited, exclaiming that there must be life nearby.

Walking a short distance we come across a settlement, I don’t remember seeing any men but the older lady we talked to said there was a total of 10 families. I think they spoke a different language but I understood them.

I noticed their settlements were enclaves carved into the earth, this is important later… They wear light clothes and cover their heads to protect them from the sun.

She mentions that they survive through the port (fishing?)

I ask her where the port is and she points to the left which I assume is west, a short distance away, and we come across the largest port I have ever seen in my life, with hundreds of gigantic ships with sails reaching hundreds of feet. There’s seagulls and the water is calm, there’s a town of a sort behind them but I can’t see it because it’s hidden by the ships.

Somehow I end up in some sort of shop where I spot a future version of the world map folded in a stand. I open it and think of how YOU(Laron) need to know about this.

I somehow get on the phone to you and tell you that I got something that will make you flip out but I can’t tell you what it is over the phone and we need to meet.

It’s a map from the future. It showed what still stood.

For the most part the rest of the world was fuzzy but still there, however, my vision was mainly targeted at the South of Australia. Although I’m inclined to think that the coastal areas had suffered some sort of disaster, the most significant was the south, of where the Great Aussie bite is.

It had stretched from one end to the next and the water had progressed more inland.

I took a look at the world map I got, trying to draw the line, and it seems that the Nullarbor Plain in the West, perhaps even as far as Perth is where the line started and ended by covering 90% of NSW.

So perhaps Perth, but definetly the Nullabar plain, Up to Woomera, and maybe even Newcastle was under water. So ACT, VIC and 90% of NSW was gone.

The bite stops I think just before Coober Pedy. And I’m going to assume so, because if the enclave settlements I saw in my dream.

Judging from the land earlier in my dream, the rest of the land may exist but it seemed it had suffered some sort of destruction, at some point may had even been under water, in the coastal areas.

Also there were three islands on the right hand side of Australia I think, although they were more, underneath/ right hand side, and I noticed that the middle one had rised in some sort if obscure square and was connected to the two smaller ones on each side but was sort if sitting on them. I didn’t think
It was NZ, so I tried to think if other islands, I dint know why Papua new Guinea came to mind since it’s on top if Australia…could have been NZ..

Also I had a quick scan of the map but couldn’t see any other islands on there. I assumed they didn’t exist or hadn’t been discovered, but with such a fleet of ships you would think they would have known. 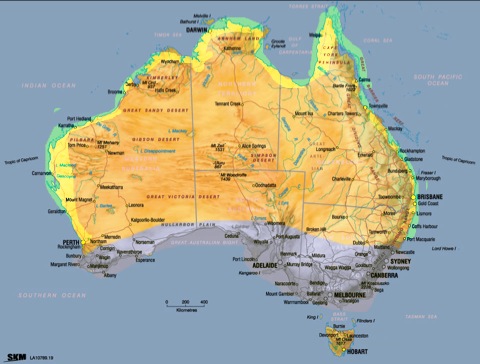 That’s the dream. Above is a picture my friend worked on to show the areas that were under water. The grey area at the bottom is showing what is covered in water on the map she saw. The sides of Australia with the yellow and blue is showing the desert like area’s where water may have been but is no longer. Note that Tasmania wasn’t on the map like on this one. It may have been part of land that had risen up nearby though. I would have to say that this looks very similar to Gordon Michael Scallion’s map above except for the bottom right corner being under water.