“Let food be thy medicine.” – Hippocrates

I recently wrote a blog about vegan’s and as a result, I heard about the documentary movie Forks over Knives that was released in 2012. From the reviews I decided to order it. It arrived three weeks ago or so and I watched it recently. I was convinced by their research and impressed as well. This is not the only source of information I have studied regarding the vegan diet. Including research I have done online, I have seen another documentary called Food Matters, read a book called the Rainbow Diet which was based on vegetarian and a vegan diet in relation to chakras(I believe I have a blog on here about that), and also read another book called Quantum Wellness by Kathy Fresnan which discusses the negatives of meat and animal products. 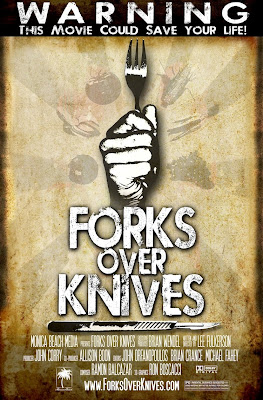 With Forks over Knives, which is based upon an international best selling book, the evidence based upon in depth multiple studies, clearly shows that animal based meals including meat and dairy, and processed foods is a major, and I mean MAJOR cause of all of our illnesses globally. Once a vegan diet is introduced, just about every illness can be cured. The Vegan diet is slowly being introduced by Doctors when they are stuck with resolving their patients issues, and is also a common recommendation by holistic healers for clients that have serious diseases or illnesses. Animal healers also explain that what animals eat is key to their health.

With the research done in this book/documentary, we are talking about reducing the number of illnesses world wide by up to 80%, from simply changing from an animal based and processed food diet to a vegan diet. This documentary focuses on folks with cancer, heart disease, diabetes and degenerative diseases. You may be thinking what about organic foods? This is mentioned in the documentary, but not in great detail. They do however say that it doesn’t make much of an impact if the a animal based food is organic or not.

Coming up I am going to do a review of part of this documentary movie, Forks over Knives. I am a healer and this is important to me to get the information out there. While I recently decided to move into becoming a full time vegan, from being a vegetarian for three and a half years, I have had trouble adjusting. After watching this, I am convinced that I really need to try harder, not just for my own health, but as a role model for others.

-The documentary starts off saying that 40% of Americans are obese.

Remember, this movie was released in 2012 so the research is going to be up to date.

-About half of Americans are taking some kind of prescription drug.
-Currently, one out of three people born in America will develop diabetes during their life time.

A growing number of researchers claim that if we eliminate or at least greatly reduce refined, processed and animal based foods we can prevent and in certain cases reverse several of our greatest diseases by moving to a whole foods plant based diet.

Lee thought his health was very good so had a check up by Doctor Lederman. The results were very bad for his general check up. He knew he was now running at a high risk for a heart attack. He went on a 12 week nutrition program under Doctor Lederman’s supervision. The plan was to simply eat a whole foods plant based diet.

There is a lot more detail about this story throughout the movie and the detailed results after these 12 weeks are explained. But basically, his health improves dramatically and was the key to resolving his medical issues.

Doctor Colin Campbell & Doctor Caldwell Esselstyn
The documentary then covers two doctors that both grew up on Farms. Doctor Colin Campbell and Doctor Caldwell Esselstyn. Back when they were growing up, people were taught about how meat is very important because it’s how we get people get their protein, and protein is a life force for animals and humans. Generations of people had this information fed to them which made them think that only meat could supply them with the levels of protein they required.

Doctor Caldwell Esselstyn focused on Animal Nutrition and Biochemistry when he was studying medicine.  He started his medical career at the world famous Cleveland Clinic  in Cleveland Ohio. Surgery became his specialty.

During the 1960’s heart disease was on the rise. The main cause of heart disease is cholesterol. Cholesterol is a natural substance produced by all animals, including humans. But when we consume dietary cholesterol which is only found in animals foods, like meet , eggs and dairy products, it tends to stay in the blood stream. This is the major cause of coronary artery disease.

It’s then shown how many heart bypasses there are annually and the total cost, each one being one hundred thousand on average. This puts in the idea in our head that heart surgery is a major revenue maker for the medical industry.

In the 1960’s, Doctor Campbell was in the Philippines trying to get protein based food to millions of malnourished children. To keep costs down, he and his colleagues decided not to use animal based protein. The program began to show success.

Doctor Campbell stumbled upon some interesting information. The more affluent families in the Philippines were eating  very high amounts of animal based foods. They were having children which were susceptible to having liver cancer. Liver cancer back then was only known to in adults so it was very unusual.

Doctor Campbell then came across a paper that was published in India based upon a study that was done on rats. The rats were fed on a protein that was only found in cows milk. They used 20% of this cows milk protein on some rats, and 5% of this cows milk protein on the other lot of rats. The tested were based upon the development of liver cancer. The rats with the 20% made the cancer row. The rats who only had 5% had the cancer reverse.

This changed everything for Doctor Campbell, the combined study in India and what he had found in the Philippines.

During the 60’s, fast food was becoming more popular in America. Cancer deaths happened to also be on a sudden rise. In 1971 President Nixon signed the Cancer Act of 1971. So it must have been bad back then with the rise in Cancer in America.

Doctor Caldwell Esselstyn in 1978 was then chairman of the Breast Cancer task force at the Cleveland Clinic. He began to doubt the medical procedures he was using as he wasn’t stopping the cancer from forming; only removing it. So he started some of his own research by looking at the global statistics on breast cancer.

China also had similar numbers and also a few other countries.

What Caldwell found was that the western diet was non existent in those countries. They had no animal products or meat in their average diet.

In 1940, Germany invaded Norway and as a result, the diet of the Norway people changed as the Germans were taking all their animals to eat. From then onwards while Germany occupied Norway, the mortality rate in Norway dropped in a major way. In 1945 when Germany was defeated, and the diet changed back to meat and dairy products, the graph rose again dramatically.
This is the main story covered in the Documentary and more research is discussed relating to these two doctors work. The results are very impressive at the end, but as you can see from where I have got up to , that there research is very well done.

Joey Aucoin
Joey is introduced into the movie. He owns a landscaping company. He is overweight and in 2004 doctors discovered he had a cholesterol value of 320 and a hazordas blood sugar level of 480. This made him a type 2 diabetic and a prime candidate for a heart attack and a stroke. We then see five bottles of pills which he has pills from each day and an injection every night for the past four years.

He says he sleeps four hours a night on average and generally feels tired and hates taking the pills.

He then moves onto the vegan diet and the results are shown at the end of the movie. Most of his issues have gone away, along with his various levels returning to a healthy state.

I was going to discuss the whole movie, but decided that it may infringe on copyright because of the detail I have gone into, so I am cutting it short here. But I really do recommend that you watch this movie as it clearly shows the facts and comes across very convincing with it’s argument towards meat and animal products being very bad to our health.

Hi Diane, by the way, are you getting email notifications on new comments if you click on the subscribe by email option below?

I have heard that before about eating raw foods. I need to try harder in that area as well. Egg's I think is the hardest thing to not consume as they are in so many food choices out there.

I'm curious guys, if you care to share more personal information, how is the vegan diet going now? Have you managed to incorporate it more, or completely? I love milk in my smoothies, I love eggs!!! At least my milk is raw and organic – the law demands it's advertised as bath milk (not fit for human consumption), and eggs are organic and free range. What do you eat? Do you feel better? I have a strong hunch that I'd feel much clearer, mentally and physically, if I cut out dairy….not too sure of my chances though. I appreciate the… Read more »

I am still not fully moved into it. I am keeping away from dairy as much as possible. I have Soy Milk and Oat milk as an alternative to milk which I love now. I don't miss milk at all. Over here in New Zealand they have coconut ice cream which is a great alternative, and also sheep ice cream for those who still can't get away from dairy but can from milk. I haven't got sick in so long now and I do believe my diet is the main contributing factor. Of course, I am very aware of my… Read more »